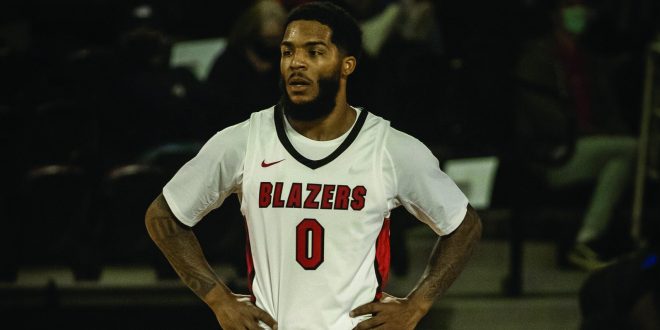 These are a few words head coach Mike Helfer used to describe Imoras Agee, a senior basketball player at VSU.

Agee is an Alabama native currently playing in his second season for the VSU men’s basketball team. Agee started playing basketball in seventh grade, but he grew up playing football.

“I grew up as a football junkie,” Agee said. “By ninth grade, I didn’t like being in the sun that often, so I just decided to stick with basketball. I realized I didn’t really like football enough to be out there.”

Agee’s reasons behind his passion for basketball are both practical and sentimental.

“Being there for my teammates, I love that. Cheering people on, seeing them do great. I feel like this is a way I can feed myself and my family. That’s how I look at it; it’s a job. You can make a lot of money from it, you can be great from it and you can meet a lot of people from it.”

Agee is majoring in interdisciplinary studies and plans to continue his career in basketball by playing professionally and eventually coaching.

“It’s not even a question,” Burke Putnam, Agee’s teammate and close friend, said. “Whether he chooses to go next year or the year after that, he’ll go pro.”

Putnam is not the only member of Agee’s team that trusts in his ability. Head coach Mike Helfer also has the utmost faith in his player.

“He can score at the three levels: the 3-point line, the midrange and around the goal, and that’s what makes him very, very good.”

Agee’s performance this season has left little room to question his ability to perform on the court, and his coach and friends say that he is just as incredible off the court as well.

“He is loyal, outgoing, caring, courageous and respectable,” Putnam said. “He is one of a kind. I’ve never been around someone like him.”

In his own life, Agee says his brother has been the largest source of inspiration for him.

“Even with everything he’s been through, he’s stayed the same,” Agee said. “He is a people guy and a family guy. He reminds me where I came from, who I need to be and where I need to be going.”

When he isn’t doing things like scoring 26 points against West Georgia, Agee enjoys things such as bowling, top golf and race car driving as well as being an avid social media user.

Agee lives his life to the fullest, but says he will never forget where he came from or where he wants to go.

According to Agee, confidence is key, and it’s important that aspiring players never let anyone take their confidence away from them.

“Continue to grind every day, stay on your grades, stay in the gym and never give up,” he said. “If you have a dream, go get it and never let anyone take it from you.”

Agee and the rest of the VSU Blazers will have their next game on Friday, Jan. 29 at the VSU Complex at 7 p.m.