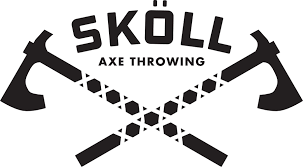 You may have seen some axe throwing on the front lawn during VSU’s spirit week hosted by Skoll Axe Throwing, but did you know the owner is actually a proud Blazer himself?

Skal is a Norwegian word meaning “Cheers!” This kind of enthusiastic feeling is exactly what VSU senior Caleb Dixon was hoping to create when he founded Skoll Axe Throwing in downtown Valdosta.

Dixon began his scholastic journey as a pre-med student but is currently studying business administration at VSU. He has always wanted to be an entrepreneur and decided the business program was a better fit for him.

“I didn’t really want to be an employee under someone, I wanted to be my own boss and do my own thing,” he said.
Dixon’s unique business venture began as a hobby when he was younger.

“My brother and I were messing around in the backyard and we made homemade axes,” he said. “We would just mess around and throw it.”

Soon Dixon realized that throwing axes was not just a backyard hobby but a sport and a business opportunity in many places around the US.

“I heard of some throwing venues up north and in Canada, and the South is always the last to get anything cool, so I started the mobile unit in July,” he said.

Dixon began his business in a mobile trailer and had his first event on July 3 at the Georgia Beer Company in downtown Valdosta.

“I started in a mobile unit because of startup cost, you know being in college and everything,” he said.””It actually worked out great because right as we got the trailer built Covid hit and we didn’t have as much invested because we didn’t have a building.”

Dixon has since found a space to share his hobby with the city of Valdosta. The official grand opening of Skoll Axe Throwing was January 30 in downtown Valdosta.

“We want to bring something to do to a college town,” he said.” “You look around and there isn’t very much to do so we wanted to bring entertainment and something to do. It’s interesting and different and not many people have done it so that’s part of why we decided to do this.”

Dixon encourages anyone and everyone to come and try throwing, and said that it’s not as difficult as people might think.

“There’s a four-step method that we teach everyone,” he said. “People usually get it within the first 15 minutes, and I will say, and I have always said this, women tend to do better than men.”

For future entrepreneurs, Dixon recommends collaborating with other businesses.

“Collaborating with other businesses was the biggest push for us,” he said. “Exposure is the biggest thing when getting started, especially with entertainment.”

Dixon hopes to continue to be a part of the VSU community by partnering with more organizations on campus to do events. Skoll has become a registered vendor with VSU for students who wish to involve the company with their events. For those interested contact Skoll Axe Throwing.

For those who wish to visit the venue, Skoll provides a one-hour session for $20. Skoll provides discounts for students, first responders, teachers and the military on the sessions.

Skoll is open Wednesday through Sunday with varying hours and is located at 128 N Ashley St, Valdosta, GA 31601.

Previous Editorial: Vaccine could be the sword to slay the dragon
Next Lady Blazers tennis finds unity in diversity