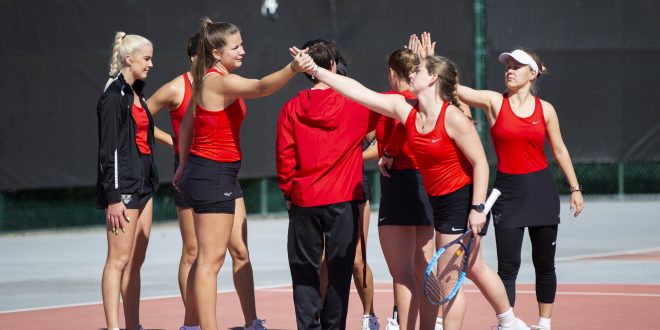 Lady Blazers tennis is set to begin the 2021 season with a team that is as uniquely diverse as VSU has ever seen.

Amelia Cornwall, a senior originally from Camilla, Ga., is the only American on the team. Every single remaining member of the team is from a different country.

Iceland, Germany, France, Sweden, The Netherlands and Belgium are all represented by the Lady Blazers.

According to VSU men and women’s tennis Head Coach John Hansen, the team is not at a disadvantage just because the players are from all over.

“When they get on the team, there’s no different countries,” Hansen said. “Everyone is a tennis player.”

“There’s only one time that they don’t get along and that’s during the World Cup. And then there is a humorous controversy.”

There are three seniors, two juniors and the rest of the team are underclassmen. Coach Hansen believes this year’s team is very capable and is expecting a lot out of them.

“We’re in a building stage, you know, but we’ve got probably the best team we’ve had in years,” he said.

For Cornwall, it has been a valuable experience, but it hasn’t been easy adjusting to playing tennis with teammates who are all from across the Atlantic.

“It’s been a learning experience for sure,” she said. “Being from the deep south—Georgia—you’re not really exposed to a bunch of international people ever, so being around them all the time has broadened my horizons.”

“I just, I learned so much about places I never knew I wanted to go until I talked to them [teammates] and learned how different and the same they are.”

Cornwall thinks that the team’s diverse backgrounds are a good thing for the team’s chemistry.

“I think it’s kind of a good thing because it makes everyone come together and, we are a family because you come home and these are the people you see every day.”

Communication is the biggest learning curve Cornwall sees when dealing with international teammates.

“Sometimes different cultures go about solving problems differently,” she said. “Some people are more direct and some people are less direct, so it’s hard, when people first come, to address the differences in communication.”

She was drawn to VSU because of the weather, academics and because she wanted to play for Coach Hansen.

The similar struggles that the team has faced in their journeys to VSU from Europe are something that Widdershoven believes brings the team together.

“I feel like they [the team] are my family here, and they all go through the same stuff that I went through when I came here as a freshman,” she said. “So yeah, I think we all bond good because we are international and come from overseas.”

According to Widdershoven, she and her teammates are like a family in the way that they focus on the positive aspects of being a diverse team.

“We’re all kind of different, but we really adjust together,” she said. “We take all the positives and make it, kind of like a family, you know.”

Widdershoven insists that this year’s team is playing much better than last year’s team because they are “just really excited to be back” following COVID-19’s interruption to their last season.

Junior Eva Rivoal, originally from France, wanted to come to America to “live the American dream” and have a new experience.

Rivoal’s passions for both tennis and travel are what brought her to VSU.

“First of all, tennis, of course,” she said. “Back in France, we are not allowed to have a team at university. You cannot expect a scholarship for your skills in sports.”

To Rivoal, the fact that the team is comprised of almost all Europeans does not directly correlate to good team chemistry.

“For sure, we have some similarities,” she said. “European minds are way different from American ones, but I wouldn’t say it brings us closer. We still are girls and I feel like, all over Europe, we have different states of mind.”

Rivoal does, however, see some things that help to bring the girls together, despite their differences.

“It brings us together, the fact that we are far from our family, and we talk in a foreign language.”

Widdershoven and Rivoal are both in agreement that the food in Belgium and France is much different—and better—than the food they have experienced in America.

The Lady Blazers are hitting the courts every day alongside the men’s team as they prepare for their first match of the season. Coach Hansen serves as head coach for both teams.

The Lady Blazer’s first match will be at home on Saturday, Feb. 6 at 9 a.m. They will be facing the University of North GA to begin the season.