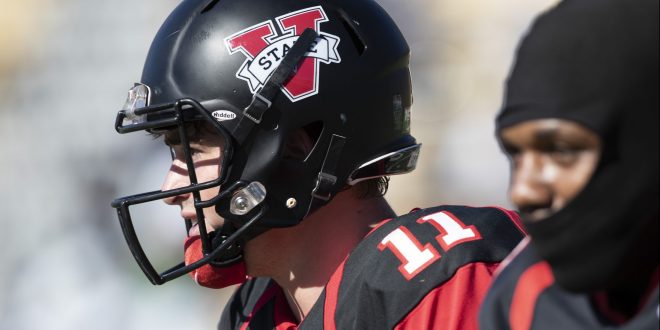 Wells has graduated from VSU, but still has a year of eligibility left because of COVID-19’s season-ending effect on college football in 2020.

Throughout his career, Wells went 28-3 as a starter and threw for 7,130 yards and 69 touchdowns with 1,932 rushing yards and 25 touchdowns on the ground. He led the Blazers to a national championship victory in 2018 as a redshirt sophomore.

Wells released a public statement concerning his decision to transfer. It reads:

I wanted to let you know that I have decided to move in a new direction with new opportunities and challenges. I cannot thank you enough for your tremendous support you have given me and my teammates over the last five years. An undefeated national championship season, back-to-back GSC championships, and a 24-game win streak. While these are all great accomplishments, I am most proud that I graduated from Valdosta State and I am now a VSU alum!  Thank you to my great teammates, coaches, and administration for the opportunity given to me. I will be forever grateful. I look forward to supporting Blazer Nation in the future as a VSU alumni and wish you all the best.

Head Coach Gary Goff supports his former starting quarterback in his decision to transfer so that he can be closer to his family during his last season of play. Read his statement below:

On January 8, 2021, Rogan Wells informed me that he had decided to enter the transfer portal to find an FBS Division I program to play at during his last season of competition. I have since been informed Rogan has enrolled at Tusculum University to finish his career while playing for his brother who coaches at the school and to be closer to family in these challenging times. We certainly wish Rogan nothing but the best. He is not only a great player, but a great young man. Rogan has been an ambassador for our program and has accomplished great success while playing for the Blazers. I am equally excited for the future of our program. We are very fortunate because our team is not made of one or two great players, but many very talented and hardworking players who are proud to be Blazers!

Coach Goff is confident in VSU’s passing game moving forward, expecting that it will prove just as effective despite the loss of Wells.

“I mean, honestly, I don’t think it will impact it [VSU’s passing game],” he said. “We’re pretty fortunate because we’ve got Ivory Durham that’s been sitting here chomping at the bits, waiting his turn, and his turn came a year earlier than we all anticipated. Ivory’s got a really strong arm and he can pretty much make any throw on the field, so I am not going to change the offense.”

Goff insists that, as long as he is provided with the same tools and coaching as Wells, Durham could be one of the best players in Division II football next season.