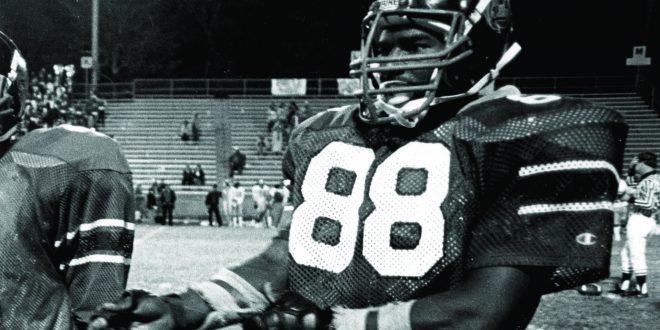 Jessie “The Hammer” Tuggle wasn’t the biggest kid coming out of high school. Even after being voted MVP of his Griffin High School football team that he led to the state semi-finals his senior year, Division I recruiters thought he was too small to compete at their level.

In fact, at only 5’10 and 180 pounds, most Division II schools were also turned off by Tuggle’s size. His story goes to show that recruiting doesn’t tell you how much heart a player has or how dedicated.

Valdosta State College’s head coach Jim Goodman must have caught a glimpse when he offered the undersized defensive end a scholarship in 1982. The only other scholarship Tuggle would be offered was from University of West Georgia.

Even though VSC’s football program was only in its second year of existence, Tuggle wanted to be further from home. Luckily, Valdosta was nearly 170 miles away and offered exactly that.

Tuggle put on 20 pounds and grew to 5’11 by the start of his freshman season in ‘83. He earned a starting position at right defensive end and was a solid contributor for a young Blazer defense that was quickly putting the rest of the Gulf South Conference on notice.

Tuggle showed hints of the game wrecker he’d soon become and was awarded the defense’s Most Improved Player Award at the end of the season.

While Tuggle enjoyed improvement, the same couldn’t be said for the team, or at least not their record. VSC finished the ‘83 season 5-6, a slight step down from the 5-5-1 record from the school’s inaugural 1982 season.

The Blazers began the ‘84 season 5-2 relying on the strength of a defensive unit led by Tuggle and team captain and all-GSC first teamer Lenny Parker.

“The Nasty Bunch” as the defense was called, allowed only 25 points combined over the first four games of the season and would finish at or near the top of the conference in most defensive statistics.

This was also the first of three consecutive years that Tuggle would be named to the All-GSC team. He was joined by fellow members of the Nasty Bunch cornerback Dallis Smith, and Parker for the second straight year.

However, the Blazers would drop their final 4 games in heartbreaking fashion to fall to 5-6 for the second straight year and fail again to record the program’s first winning season.

Next year, new head coach Jim Berryman moved Tuggle to inside linebacker during the spring, a move that would “pay dividends” according to the school’s 1985 football program.

This, Tuggle’s junior season, was when he established himself as a leader on the team and one of the most dominant defensive players in the conference. Now up to 230 pounds, Tuggle was known for his bone-crushing tackling. He finished the season with 107 tackles.

Tuggle’s tackling and leadership earned him another all-conference honor at the end of the season. This was his first year making first-team, an honor shared with three other Blazers that season.

The Nasty Bunch, led by Tuggle and fellow conference first-teamer Dallis Smith, allowed only 14.8 points per game, the 23rd stingiest mark in the country. They also only gave up 133 passing yards per game which ranked an even more impressive 13th nationally.

The offense however continued to struggle, and the Blazers finished the season at 5-6 for the third season in a row. Still no winning season for Tuggle and the Blazers.

To make matters worse, head coach and architect of the Nasty Bunch defense, Jim Berryman, left at the end of the ’85 season.

University of Georgia running backs coach Mike Cavan was named Berryman’s replacement before the spring of the ‘86 season. Coach Cavan was hired with expectations to fix the wildly inconsistent blazer offense. It was clear before long that he had succeeded.

However, it was the defense yet again that stole the show for VSU. Cavan inherited a stout defense ready to wreak havoc in the GSC. Cavan named Tuggle and teammate, Smith, captains of the team.

Despite entering the season predicted to finish eighth out of nine teams in the conference, Tuggle led VSU to second in the conference and a 9-2 record, which was a landmark season for the Blazers.

By the end of his senior season, Tuggle would again be named first-team all-GSC. He was also named the 1986 GSC-Defensive Player of the Year, the school’s first to win the award, and he was named a consensus first team Kodak All-American.

Tuggle also led the Blazers in tackles for the first time in his career with 129 on the season, the second highest season total in VSU history. Tuggle would leave the school’s all-time leading tackler (340), though he has since been passed by Larry Dean and Chris Pope.

From VSU, Tuggle would go undrafted in the 1986 NFL draft.  Despite bulking up to 230 pounds, his 5’11 frame still concerned NFL scouts that questioned whether he’d be able to hit NFL athletes as hard as he’d been hitting collegiate ones. However, thanks to connections Coach Cavan had with the Falcons, Tuggle was able to secure a tryout.

He made the most of this tryout to launch a 14-year NFL career and played for Atlanta every year of it. Tuggle is on a short list of professional athletes to have played their entire careers in Georgia from high school all the way to the pros.

Tuggle started a few games his first two years, but it was during the 1989 season that he really started to come into his own.

The 24-year-old started at middle linebacker every game that season and led the Falcons in tackles (183) in 1989, a feat he would repeat nine consecutive seasons until 1998.

The improvement continued into the 1990 season, when Tuggle led the NFL with 201 total tackles.

Tuggle led the league in tackles four times during his 14 year-career.

The bruising linebacker recorded 200+ tackles in two different seasons. There are only three seasons ever in which a player has accomplished this feat.

In 1991, Tuggle set the Falcons all-time record for tackles in a single season with a whopping 207.

Perhaps due to the lack of his team’s success, Tuggle wasn’t voted to the pro bowl in either of his seasons with 200 tackles in ’90 and ‘91. Tuggle made his first pro-bowl in 1992 and made five in total during his career with the Falcons.

Even though the Falcons frequently lost during Tuggle’s early years on the team, he remained faithful to the team, never leaving Atlanta.

During the NFC championship against the Vikings in 1998, Tuggle tallied a franchise playoff-best 11 tackles to send the Falcons to their first ever Super Bowl.

After losing the Super Bowl to the San Francisco 49ers, Tuggle’s decorated career was drawing to a close. He missed ten games over the next two seasons and would ultimately retire at the end of the 2000 season.

Tuggle retired with over 1800 total career tackles with the Falcons (due to tackles not becoming an official NFL statistic until the early 2000s, Tuggle’s stats vary between 1600 and over 2000), first in the history of the franchise by nearly 700.

Tuggle’s #58 jersey is memorialized in the Falcons ‘Ring of Honor,’ and his #88 jersey was retired by VSU.

Tuggle was a part of VSU’s inaugural hall of fame class in 1997, and 10 years later he was voted into the College Football Hall of Fame as one of the greatest athletes to ever come through VSU.

In 2009, VSU completed the Jessie Tuggle Strength and Fitness Complex in recognition of Tuggle’s legacy.

Few players in the history of the sport have matched the consistency and production that Tuggle delivered over the entirety of his football career, spanning 14 pro seasons and 4 years in both college and high school.

Tuggle’s son, Grady Jarret, is currently a two-time pro bowl defensive lineman for the Falcons going into his seventh season in 2021.

Previous What does Black History Month mean to you?
Next Valdostans weigh in on $15 minimum wage proposal