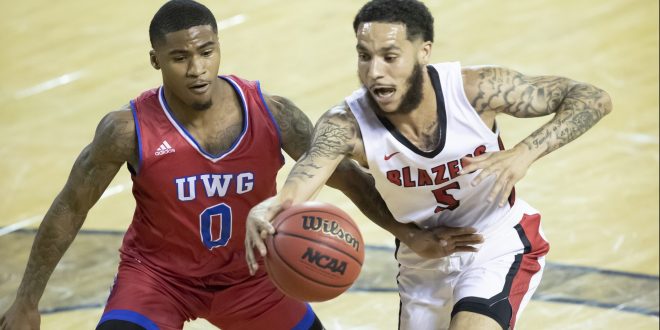 With VSU’s 2020-2021 men’s basketball season in the books, a lot will change between now and next fall as key players have decisions to make on their futures.

The season was unprecedented and historic for several reasons. Despite playing through a pandemic, VSU was able to break through and win their first-ever Gulf South Conference tournament title.

However, VSU’s run in the NCAA Division II tournament was over before it even began. VSU lost to archrival West Georgia 79-75 in the opening round of the South Regional on March 13, which was held at the Complex.

While VSU only has three seniors on the roster—with one being a graduate transfer that saw limited action—two of them were key parts of VSU’s historic season.

Under normal circumstances, these players would have exhausted their eligibility, but things are different due to the coronavirus pandemic. In October, the NCAA voted to give an extra year of eligibility to all winter-sports athletes, regardless of how many games they played.

While Agee and Putnam could choose to come back to play another season, they could also choose to turn pro. Despite being a Division 2 school, VSU has had success in putting players into pro leagues, both in the states and abroad, according to head coach Michael Helfer.

“We have had 24 guys play professionally after VSU,” Helfer said. “That says a lot about each one as a player and as a person. Our system is focused on playing fast and scoring and that prepares them for professional basketball.”

Moving forward to next season, regardless of whether Putnam and Agee choose to return, graduate, or turn pro, Helfer stressed the need to shoot the ball better to make a deeper run.

“We have not shot the ball well in the past few NCAA tournaments,” Helfer said. “That has been our Achilles heel and we need to make more shots, especially 3’s, to advance deeper in the tournament.”