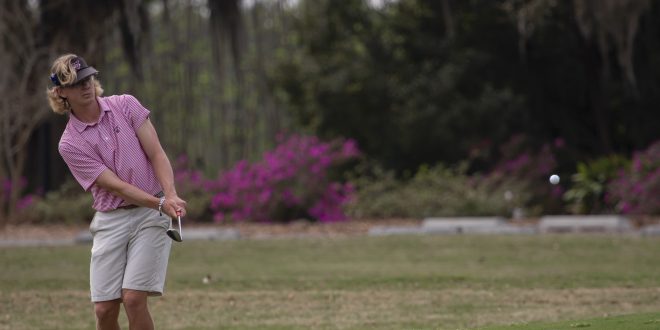 The VSU men’s golf team is looking to finish the regular season with their first tournament win of the season at the Argonaut Invitational on Monday, April 5 and Tuesday, April 6.

The tournament will be held at the Pensacola Country Club in Pensacola, Fla. and is being hosted by West Florida.

The golf team will enter the tournament ranked in the Golfstat Division II top 25. The Blazers clocked in at No. 25 in the most recent rankings, which were released on March 31.

In their most recent tournament, the Cougar Invitational hosted by Columbus State in Columbus on March 29-30, the Blazers finished fourth out of 13 teams. The Blazers as a team finished 36 over par for the event with a score of 876 over three rounds.

The hosting Cougars won the event, finishing 10 over par and a team score of 850.

There will once again be 13 teams in attendance at the Argonaut Invitational. This tournament features schools from the Gulf South Conference and the Sunshine State Conference.

The tournament also includes several ranked teams. Including the Blazers, 10 schools enter the tournament ranked, including 5 teams ranked in the top 10 and the top-ranked team in Division II—the hosting Argonauts.

Despite the tournament being filled with ranked teams, the team is familiar with playing against the best, as well as many of the participating teams in the tournament.

“Each event we compete in is always deep with teams being nationally ranked,” head coach Jared Purvis said. “We never shy away from wanting to compete against the best. The Argonaut Invitational, the GSC Championship, and Sunshine State Conference Championship will all be important in making the final determination for advancing to NCAA postseason.”

While Purvis says that the team has been improving through each tournament this spring, he also believes that the team is capable of shooting even lower.

“The areas we have focused on the entire spring is increasing our Greens in regulation stat,” Purvis said.  “Doing so will provide us with increased birdie opportunities. Also, we are working hard on our course management decisions to make sure we are minimizing unforced errors.”

Following the Argonaut Invitational, the Blazers will begin preparations for the GSC Championship, which will be held on April 18 and 19 in Mobile, Alabama.