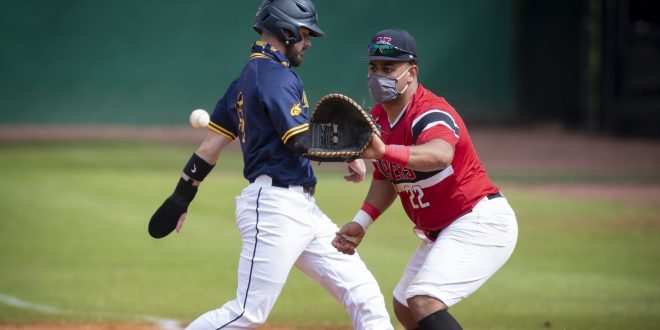 This weekend’s series at West Alabama has become a must-win because of VSU’s current six-game losing streak.

The Blazer baseball team has been swept by Delta State and West Florida over the past two weekends.

Valdosta’s six-game skid has dropped them from third in the Gulf South Conference down to only a half game out of sixth, with a 12-11 conference record (14-12 overall).

West Alabama is currently 9-10 in conference play, good for 8th place. They stand at 11-11 overall, right at .500. West Alabama is coming off a 2-1 victory in their last series against Montevallo.

The three losses to Delta State over the weekend for the Blazers were decided by four total runs across all games. Two games ended in walk-off fashion; the first on Friday, a walk off two-run homer, and the last game ended with a walk-off hit-by-pitch in the 11th inning.

Unfortunately, you don’t get anything extra in the standings for close losses, and many more of any kind will make it all but impossible to make it to the regional tournament outside earning an automatic bid (awarded to the team who wins the conference tournament).

As far as post-season play goes, West Alabama’s hopes are even slimmer. Despite coming off two wins in their last series against Montevallo, West Alabama still sits in eighth place in the conference. It doesn’t help that West Alabama has played the fewest games of any GSC team this season.

They have had multiple series canceled on three separate occasions, as well as having multiple games moved around due to weather and COVID-19 protocols.

West Alabama’s stats don’t tell the story of a winning team. They are ninth in the conference in both team batting average (.268) and team ERA, right at 6.00.

West Alabama has also had problems with fielding this year.

Their forty errors on the season are five more than the Blazers have committed, despite the fact that West Alabama has played four fewer games. West Alabama’s .947 fielding percentage is the second lowest in the GSC this season.

Third basemen Jake Nemith, the leadoff batter for West Alabama, paces the offense batting .348 in conference play with four steals. One percentage point behind him is junior outfielder Brayden Lyman, with a .347 average.

West Alabama, as a team, has only hit nine home runs on the season, eleventh in the conference.

Designated hitter Gavin Rogers has hit three homers so far in conference play and leads the team. Nemith is second with two. No other player on the team has more than one.

The team’s starting pitching rotation has struggled this season; but the bullpen has been the strength of the team, featuring multiple solid arms. Overall, the teams 6.00 ERA isn’t great, but their opponents batting average tells a different story. At only .257, they sit fifth in the conference.

RHP Connor Brooks leads West Alabama in innings pitched with 42 over 8 starts. The junior has a 2-4 record through eight starts, and his 6.33 ERA is 33rd in the Conference. His 51 strikeouts are also the most on the team, and the seventh most in the GSC.

Coming out of the bullpen, Mason Hollander has the best ERA of any of West Alabama’s pitchers at 1.33 ERA in 20.1 IP (Innings Pitched) through eight games. The junior right-hander also leads the team in wins with a 3-0 record.

West Alabama also has Devin Sisson and Landen Davis coming out of the bullpen, both pitching 10 or more innings this season with a 2.7 and 3.09 ERA, respectively. Both pitchers also have 10 strikeouts a piece.

If the Blazers can rough up the West Alabama starters for an inning here and there, it could be enough to take the series.

However, the Blazer’s bullpen has struggled the last few outings. A group that had been a strength of the team has allowed three or more runs in four out of the last six games.

As we enter the last month of the regular season, time is running out to right the ship and fix any issues the team may be having, be it relief pitching, hitting or anything else. The best opportunity to do that will be when they go up against West Alabama this coming weekend.

The series will be hosted by West Alabama at Tartt field in Livingston, Ala. on Saturday, April 10. The first pitch will be thrown at 2 p.m. The series will close April 11 with game three set to start at 1 p.m.