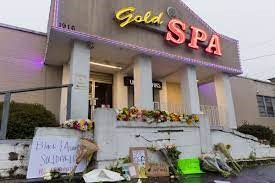 On March 16, a mass shooting occurred at a local Atlanta Asian-owned nail salon and spa.

The Asian community has an increase in racism since March 2020, when COVID-19 first rolled out. Fingers were pointed at them, placing the blame on what had befallen unto the world. Former president Trump has referred to COVID-19 as the “China virus” or “Chinese virus” on national news, according to CBS news. The New York Police Department has reported 28 arrests for hate crimes against Asians in 2020, according to CNN.

Other than this recent shooting, other crimes against Asians have recently been committed.
On March 29, a man in New York pushed an elderly Asian woman on the ground and continuously stomped on her until he decided to leave. The suspect is named Brandon Elliot, who is currently on parole after killing his mother 20 years ago. He was later arrested on Wednesday of the following week and will serve 25 years in prison if convicted.

Sixteen-year-old Tik-Tok creator, influencer and streamer Michael Chen (@mcplaygt) sat down with his mother in a Tik-Tok to address the issues on recent Asian crimes on March 20.
“This is not our usual type of content but today we want to use our platforms to speak up on the Asian American, Pacific Islander hate crimes,” Chen said.

His mother voiced her opinion in the video saying the shooting at the nail salon is “too much.”

We the people need to band together and speak out against these crimes. Asians shouldn’t have to live in fear or be afraid to step outside their own homes worried that they’ll be attacked.
“People will judge you by how you look, if you look Asian, if you wear a mask or just pick on you no matter what,” Tracy Win Liu, a writer in Dallas, Texas, originally born in China said in an interview with BBC news.