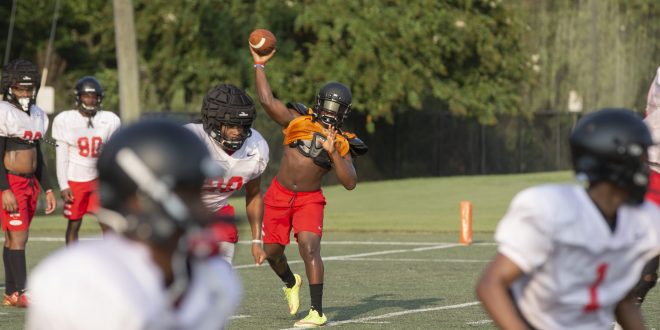 VSU will host Savannah St in first football game since 2019

The VSU football team is set to hold its first game of the season against Savannah State on Sept 4 in the Bazemore-Hyder Stadium.

This game will mark the first time in 644 days since the football team last played.

However, that isn’t slowing down the hype for the 2021 football season.

VSU enters the season tied for No. 6 in the nation in the AFCA Coaches Poll, released on Aug 16. In addition to being ranked in the top 10, VSU was picked to finish second in the Gulf South Conference behind defending national champion West Florida.

When VSU last played in 2019, the Blazers were amid a 25-game winning streak that included a national title in 2018. Their season ended with an upset loss to UWF in the second round of the 2019 playoffs.

Despite the renewed high expectations, head coach Gary Goff and the team aren’t focused on the hype.

“We’re just trying to go out and get better every day,” Goff said. “While we accept the expectations, we aren’t buying into the white noise surrounding this upcoming season.”

With it being nearly two years since VSU last played a football game, there has been some rust for both the players and the coaches, according to Goff.

The Blazers will be having a mock game Saturday, Aug 28 in preparation for their season opener.

Following Rogan Wells’ decision to transfer to Tusculum and later to Western Carolina in the spring, all eyes shifted towards junior Ivory Durham at quarterback. After months of speculation, it seems as though Durham is ready to lead the Blazers.

“Ivory has really stepped into the position,” Goff said. “He is not only challenging himself to get better, but also his teammates. He is preparing as a leader. Freshmen Jermaine Brewton and Sam Edwards have also been doing well and are competing for the backup position.”

The long pause in action has allowed VSU to build up depth at nearly every position on the roster. That includes the offensive line, which Goff said was a weak spot during the 2019 season.

“It has been an extremely competitive camp,” Goff said. “We’ve been able to build up a lot of depth through recruiting over the past year and a half.”

Through all of this, COVID-19 remains a big concern among the players and coaches.

According to Goff, while many players have been fully vaccinated, some players still either need to get their second dose of the vaccine or have not gotten vaccinated at all.

Still, the team is eager to get back on the field to play.

“We’re just excited to get to play someone other than ourselves,” Goff said.