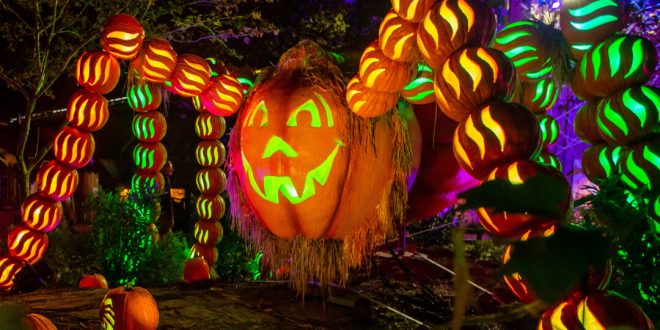 With October finally here and Halloween right around the corner, Wild Adventures has brought back their October events until the end of the month.

Both of these events are fairly new and fall-themed based around both Halloween and the season in general, as seen by the pumpkin-based food and the jack-o’-lantern iconography across the park.

The Pumpkin Spice Festival is a food-based event, featuring four different menu distinctions: “Pumpkin-Sized Bites” features their larger snacks and meals, both sweet and savory; “Spiced-Up Snacks” are exclusively snacks, with a wide range of palates, all featuring pumpkin spice in some way; “Tasty Treats” resemble fair food, lighter and cheaper, and are all sweets; “Sweet Sips” is their pumpkin-themed drink menu, featuring two selections of coffee as well as their take on an Arnold Palmer. These only last until the event is over.

Another part of this event debuted on Friday, Sept. 23, called the Great Pumpkin LumiNights. This event features illuminated sculptures made of jack-o’-lanterns, from bats to spiders to zoo animals, such as lizards. These sculptures tower over the guests, greeting them with wide grins that glow as the day turns to night.

The event requires a “PSF Passport,” a purchasable item that gives you access to five items of your choice and unlimited soda, saving over $10 from the event. This event is accessible in three different ways, one of which requiring season passes.

These “PSF Passports” come with three new ways to pay. The first, called the “Pumpkin Spice Festival Passport Admission Bundle,” is the general one-day-only ticket into this event. This includes a selection from each food section and two Tasty Treats, as well as additional benefits such as an unlimited soda wristband. This bundle checks out to be $59.99 per person.

If you already have a passport, you gain access to the “Pumpkin Spice Festival Passport Add-On”. This includes the same deal, but for a hefty discount, totaling to $30.99. This adds the same deal to the passport, adding more opportunity to try new foods as you go.

Season pass holders gain access to the “Pumpkin Spice Festival Season Passholder Discount,” which puts them at the cheapest discount on this sweet deal. They gain everything the passport has to offer, but dropped to the low price of $25.99 for the entire event.

Both the Festival Passport Add-On and the Season Passholder Discount are able to be renewed with additional purchases. These events will last until Halloween night, and run throughout the park hours.