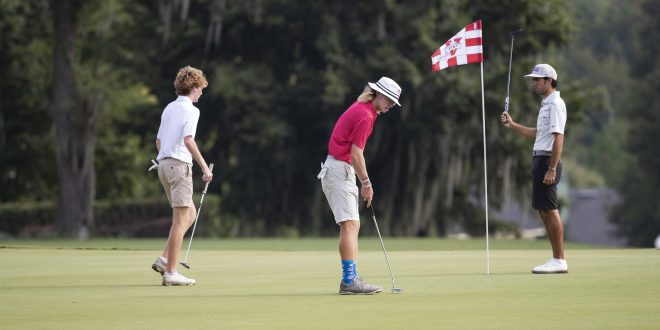 The VSU men’s golf team placed eighth at the Cougar Invitational, which was held on Sept. 27-28 in Columbus, Ga., with a 54-hole team score of 880.

It was a disappointing start for VSU, who entered the year ranked No. 27. VSU did bounce back with a fourth-place finish at the NCAA South/Southeast Super Regional Preview, which was held on Oct. 4-5 at Kinderlou Forest Golf Club.

Despite the tough finish at the Cougar Invitational, there were some encouraging things to take away from the team’s performance.

“Two of our three rounds were acceptable when you compare them to the rest of the field,” head coach Richard Purvis said. “The guys always stayed positive and were committed to a game plan.  Major mistakes were avoided.”

Part of VSU’s performance was due to the rest of the field. Seven teams that competed in the Cougar Invitational were ranked in the top 25, including West Florida, who was ranked No. 2.

In addition, the course and weather conditions were ideal, but there were some complications that affected nearly all the teams.

“Hole locations were tough, which is why all but one team finished over par,” Purvis said.

At the NCAA South/Southeast Super Regional Preview, VSU led the field after 36 holes. However, they struggled on the final round, shooting 13-over par.

Weather was a factor for the final round, with rain being off and on throughout the day.

One thing that Purvis wants to see is for a player to step up and be a leader for the team.

“Since Matt Anderson’s departure, we haven’t had that one golfer that shoots at least one round under par in every event,” Purvis said.  “We definitely have players with that capability, and I know they are working hard to be that individual.  Hopefully, it won’t be just one because we have several that can.  One of our goals this year is to be a team that is feared when we show up.”

VSU will be back in action on Oct. 18-19 when they travel to Palm Harbor, Florida to compete in the Copperhead Championship.