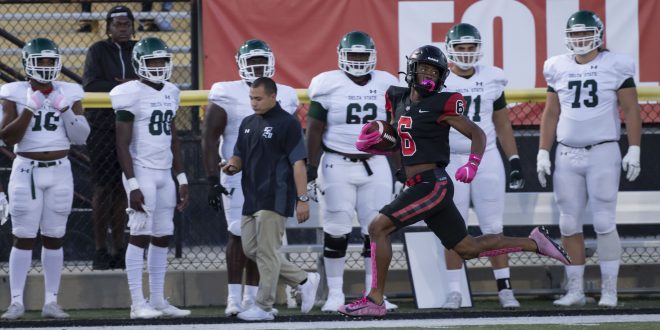 VSU shuts out Delta State in the Pink Out Game

The win sets up a top ten showdown with West Alabama (6-0) in Livingston that will take place on Oct. 16.

VSU got the scoring started on the opening kickoff on a trick play. Redshirt junior Jamar Thompkins received the kickoff and threw a lateral pass to senior Lio’undre Gallimore, who ran it 90 yards to the house.

“It was something we had been working on since the start of fall camp,” head coach Gary Goff said.

Gallimore would score again off a 31-yard touchdown pass from junior Ivory Durham on VSU’s next drive to put VSU up 14-0. Huge runs by junior Seth McGill, which helped set up a 4-yard touchdown run by Thompkins to give VSU a 21-0 first quarter lead.

VSU’s run game continued churning out yards in the second quarter, with both McGill and Thompkins finding the endzone in the quarter to build a 35-0 halftime lead. McGill scored from 35 yards out, while Thompkins scored his second touchdown of the game from 5 yards out.

The run game continued churning up yards in the second half as McGill and Thompkins continued to add to their stats. McGill finished with 186 yards and a touchdown on 14 attempts, while Thompkins had 134 yards and two scores on ten attempts.

In all, VSU rushed for 401 yards and four touchdowns on 39 attempts.

“We hit a couple of deep balls early, which opened up the run game, and then we just rolled it back to the running backs and offensive line all night long,” Goff said. “I mean 401 for the stat sheet, that’s pretty impressive for an air raid team right there, but I thought we did a good job at taking what they gave us.”

The defense was also stellar for VSU. Delta State was held to 0-4 in the red zone, including three missed field goals.

Delta State, which threw for 459 yards last week in a loss to West Florida, was stymied by the “Black Swarm” defense. Delta State’s Patrick Shegog and Cole Kirk combined for 17 completions and 32 attempts and just 202 yards.

“We did a good job at taking away their passing game early on, and we did a good job at holding them in the run game,” Goff said. “I mean stat wise, we held them to 361 yards, and they’re big and physical, but our run defense had a great game plan and held them in check.”