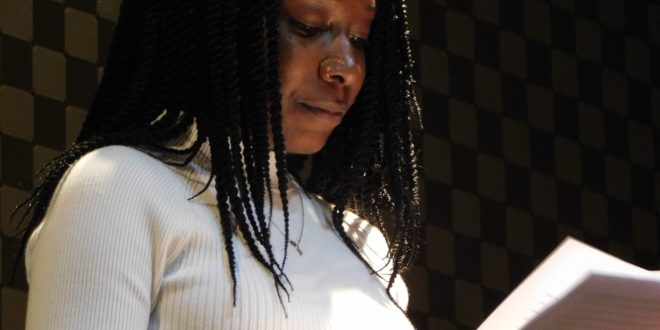 Ariel Fulton reads “A Letter to My Niece” to her audience at the University Center Theater.

On Nov. 3, Ariel Felton, a writer from Savannah, GA. and outstanding alumna of 2021, met VSU students at the University Center Theater and read her nationally recognized piece, “A Letter to My Niece.”

Graduating from VSU in 2012, Felton received her B.A. in English and went on to receive her M.F.A. in Writing from the Savannah College of Art and Design.

During her time at VSU, Felton acted as the Feature Editor for the Spectator, VSU’s student-run newspaper, making fond memories, such as 3 a.m. adventures to the local Waffle House.

Felton went onto work as a freelance journalist, publishing articles in publications such as The New York Times, The New Yorker, The Washington Post, The Bitter Southerner and McSweeney’s.
In February of 2019, Felton published “A Letter to My Niece” in The Progressive magazine.

She said that the she was inspired by James Baldwin’s 1962 piece, “A Letter to My Nephew,” which was first published in The Progressive.

Felton’s essay goes into detail about the labels that bind and restrict people, Felton writing to her niece about her own personal experiences with the labels an African-American woman faces in a lifetime.

Felton’s piece, “A Letter to My Niece,” was listed as notable in “Best American Essays 2020”, by André Aciman.“I was really excited when this piece was included as a notable American essay,” she said.

Felton said that the labels she discusses can be felt by everyone and enjoys it when someone is able to get something out of her writings.

“The pride comes from others recognizing themselves in something I write,” Felton said.

According to Felton, Joan Didion’s writing style had a big impact in how she felt about experimenting with unique styles in journalism.

“I think of her as the writer that gave me the permission to play around in journalism,” said Felton.

After the reading, Felton fielded questions from the audience, touching on her experience in getting “A Letter to My Niece” published and how she started as a freelance journalist.

Felton, for the writers in the audience, said that they should make sure to find a writing community to get involved in, pointing to her own circle of artists and writers in Savannah.

“You cannot write in a vacuum,” said Felton.

Currently, Felton works at Deep Center, a 501(c)(3) nonprofit, founded in 2008 to address the detrimental effects of poverty on literacy in Savannah, GA.

There, she works with youth in collaboration with mentors and artists to enlighten and lift up the next generation.

“A lot of the things they talk about are inspiring,” said Felton, referring to the youth she works with, “I think their penchant for social justice lets them ask questions with more empathy.”

Felton continues to work as a freelancer alongside her work at Deep Center and encourages journalists to never let a busy schedule take away their writing.

Previous McGill relishes star role on football team
Next ‘Venom: Let There be Carnage’ draws fans in for a sequel, now a top grossing film of 2021