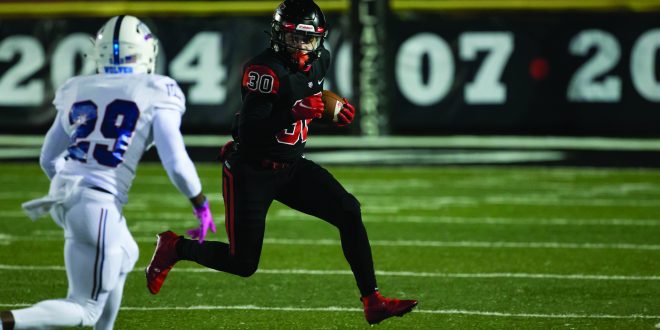 VSU fourth-year junior running back Seth McGill brings the passion and energy every time he’s on the field, whether it’s carrying the ball as a rusher or returning kicks on special teams.

McGill, a native of Miami, Fla., knows he must take advantage of every opportunity presented before him. After all, it is how he got into football.

“Before I got into football, I used to play tennis and soccer in middle school,” McGill said. “I also tried out for the basketball team but didn’t make the team. I tried out for the football team in high school and made the roster and have been playing football ever since.”

After playing football at Miami Central High School, where he totaled 12 rushing touchdowns and six passing touchdowns, McGill was recruited by then Blazers head coach Kerwin Bell to play football at VSU.

As a backup running back in 2018, McGill had a huge season, having over 1,000 all-purpose yards, including 712 yards and ten touchdowns on the ground. McGill earned second team all-GSC honors for his efforts as VSU capped the season by winning the national championship.

He added on to his accolades in 2019 as he again topped 1,000 all-purpose yards. He earned his first career start against Florida Tech, rushing for 89 yards and three touchdowns on 12 carries.

Following the 2019 season, McGill was named to the First Team All-GSC and to the GSC All-Decade First Team as an all-purpose back.

So far this season, McGill has exceeded his rushing totals for both his freshman and sophomore seasons, tallying 773 yards and eight touchdowns on 108 carries. He has also been named GSC Offensive Player of the Week twice for his efforts.

While McGill would very much like to go to the NFL after college, he is also bachelor’s degree in criminal justice. He plans to use that degree to become a parole officer should he not make the NFL.

McGill says that his biggest inspiration is his mom, Vivian Copeland.

“My mom pushes me to give my best effort at whatever I do,” McGill said. “My family drives to see me play at every game I play, home and away.”

His favorite player is Tennessee Titans star running back Derrick Henry, whom he tries to model his game after.

McGill loves the atmosphere present at VSU and being around his teammates.

“The best part about playing here is that I get to have fun,” McGill said. “It’s always an exciting atmosphere here, and this team is like my second family.”