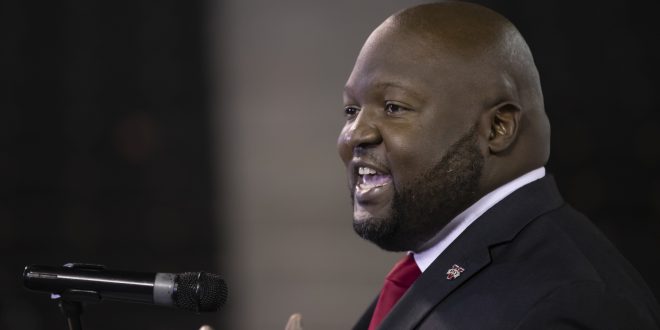 Jackson is VSU’s first ever Black head football coach, and the 11th head coach overall. He will inherit a Blazer program with high expectations fresh off a loss in the Division II National Championship.

Jackson comes from NCAA Division II, Colorado Mesa with hopes to be the fourth. He was introduced at The Complex on Thursday, Jan. 6, by President Dr. Richard Carvajal and Reinhard.

Jackson spent his last two years in Grand Junction, where he led the Mavericks to an 8-2 record in his only full season last year. Jackson finished 10-3 overall record with the Mavericks including the shortened 2020 COVID-19 season.

In Jackson’s time at Colorado Mesa, he quickly established a dominant defense. His Mavericks finished top 10 in Division II in multiple defensive categories, including yards per game allowed and touchdowns allowed.

In his introductory press conference, Jackson made clear what his emphasis will be on VSU, who finished as the 2021 Division II runner-up.

“We’re going to be physical. We’re going to be hardnosed. We’ll have a defense that loves to run around and hit people and knock people completely out,” Jackson emphatically said to the crowd of starry-eyed Blazer fans.

This was a sentiment which Reinhard said Jackson had echoed with him in their interview conducted over the phone. Reinhard also praised Jackson’s interview, stating that it was one of the best that he’d heard in his 30 years as VSU’s athletic director.

It wasn’t surprising to hear that after Jackson took the stage and exhibited the same passion that Reinhard had spoken of.

Fans will expect to see that passion instilled in the VSU players this coming year, and everywhere Jackson has gone he’s delivered on that.

Jackson has also always brought with him one of the top defenses in his division, as well as a tradition of academic excellence.

“You’ll see a football team that takes as much pride in the classroom as we do on the football field,” Jackson said.

One must look no further than the 18 different Mavericks players garnering academic accolades with Jackson at the helm. That includes the four named to the all-conference academic first team, and the two that were named CoSIDA Academic All-Americans.

What’s even more impressive is Jackson’s football resume. His prior stop was as the defensive coordinator at Division I-FCS Abilene Christian University in 2017-2018.

Jackson took one of the worst defenses in the country and turned it into a unit that, in his last year in 2018, finished in the top 25 in the nation in multiple defensive categories, including top 15 finishes in sacks, and rushing defense.

Jackson was also a part of the Wildcats’ first ever winning season in Division I, finishing with a 6-5 record in 2018 after a 2-9 finish the previous year.

Before that, Jackson filled multiple roles for Division II University of Sioux Falls for four years from 2013-2016.

After starting his first year as a defensive line coach, he went from defensive coordinator to assistant head coach from 2014-2016.

During those three years, the Cougars recorded a record of 32-5 and recorded firsts such as earning the school’s first playoffs berth, and their highest regular season national ranking.

In Jackson’s final year at Sioux Falls in 2016, the Cougars finished 12-1 while winning their first NCAA playoff game in program history. That team lead the Northern Sun Intercollegiate Conference in multiple defensive categories.

Jackson also led his Cougars to 11 defensive players earning their way on to the All-NSIC team that year.

Jackson inherits a talented VSU roster, but also one that has been gutted by graduation, so he will need to coach up a new crop of All-GSC talent. VSU graduates five GSC first team members and three second teamers, as well as double-digit seniors overall on both sides of the ball.

Fresh off a successful 12-2 season and a trip to the Division II championship game, on 12/19 Goff announced he would be leaving to accept the Head Coaching job at FCS McNeese State.

The Blazers are a team still full of  playoffs experience and Jackson spoke Thursday about how excited he is to join a team with such a winning tradition.

In that sense, Jackson’s goals align very closely with the expectations of his new fan base. Jackson wrapped up his introduction speech with one last assurance of what he brings to VSU’s storied football program.

“We’ll have a lot of grit.” Jackson said. “We’ll have passion and perseverance for our long-term and meaningful goals. We will do this every single day, every single play. That is my promise to you.”

Previous Photos: Why should you attend VSU? A Spectator reporter’s virtual tour
Next Column: Being a feminine male doesn’t equal struggling with sexuality