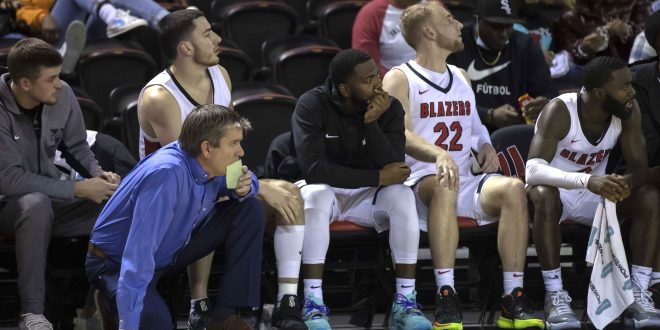 Blazers Slip on Road Trip, Fall Back to .500

The VSU Blazers dropped a pair of road games in TN this past week in GSC competition.

First, on Thursday they were in Memphis, TN playing Christian Brothers, and ultimately falling 81-74 despite a late attempt at a comeback.

The Blazers played at Union on Saturday, and that game was never close as the Bulldogs jumped out to a 52-40 halftime lead en route to 112-86 final.

This week’s losses see the Blazers continue their frustrating season-long trend of fluctuation between .500 and a couple games above it.

Thursday’s game against the 5-11 Buccaneers presented an opportunity for the Blazers to separate themselves from the middle of the pack in the conference some.

Instead, with that loss followed by the one against the Bulldogs, the reigning conference champion Blazers find themselves in the bottom half of the 2022 conference standings at 5-6 in conference play.

The Blazers have been one of the best 3-point shooting teams in the GSC this season at 37%, even after going ice cold on the road trip, hitting only 9 for 40 across both games.

Better 3-point shooting would have been crucial late against the Buccaneers when the Blazers went 0-6 over the final 15 minutes of the game.

Despite not being able to hit the broad side of a barn from outside 15-feet, the Blazers got the game close at the end.

The Buccaneers had a 16-point lead with eight minutes to go, but the Blazers fought back and faced nothing more than a two-possession game the whole way inside the last three minutes.

They weren’t able to get all the way there as the Buccaneers kept hitting shots to keep the Blazers at arm’s length, despite Jacolby Owens’s heroic efforts. The junior shooting guard did all he could for the Blazers scoring or assisting on 18 of their final 24 points during that run.

It wasn’t enough however, as the Buccaneers onslaught of four double-digit scorers overcame Owens and the Blazers.

VSU was unable to bounce back against the Bulldogs on Saturday, falling behind early and never really recovering.

The Bulldogs’ 112 points were the most scored against a GSC team in conference play this season.

They used a three-minute long, 11-2 run in the middle of the first half to break the game open, 32-16. A couple minutes later the Blazers were staring at an 18-point deficit with seven minutes until halftime.

The lead would balloon to 28-48 with three minutes remaining before the Blazers started to chip away some.

Using a couple threes and fast break layups the Blazers would trim it to ten right before halftime to go into the break down 12.

The Bulldogs didn’t wait long in the second half to start to pull away, however. Three straight threes from the Bulldog’s Tyree Boykin pushed the lead to 16 in the first four minutes of the second half.

Boykin is the GSC’s second leading scorer at 18.6 points per game, and he continued to rain threes as the Bulldogs lead swelled to 26 with four minutes to play.

Boykin finished with 30 points, knocking down seven of his eleven tries from deep

Boe Nguidjol added 24, and Justin Debuck 22 and 6 assists for the Bulldogs, who shot 54% from the field as a team.

The Blazers had four players score in double figures, but only shot 45%. Owens and Gordon finished with 18 points apiece, while Cam Selders added 13 and Cam Hamilton added 12, but went 1 for 6 from deep.

VSU has the week off as they prepare to face GSC rival West Florida at the Complex next Saturday, Jan 29. The women’s game tips off at 2 p.m., and the men’s at 4 p.m.

Previous People Poll: Are your classes going well so far?
Next Dedo Maranville Fine Arts Gallery kicks off the new year with an art competition