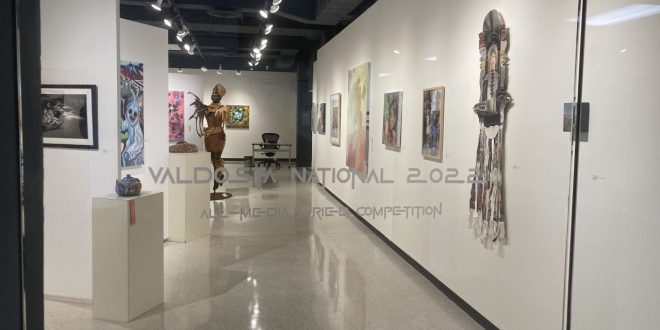 The Valdosta National 2022 All-Media Art Competition kicked off last Tuesday at the Dedo Maranville Fine Arts Gallery at 6 p.m. with a reception where the winners were announced.

Michael T. Schmidt, Associate Dean of College of the Arts, announced that the show was curated by Professor Julie Bowland from 344 pieces, by 136 artists from 39 different states. Samuel Dunson, the juror of the competition, then dwindled that down to 58 pieces from 58 artists from 30 states that procured four winners and many honorable mentions.

First place went to Matthew Schellenberg, an artist from Farmington Hills, MI with his piece “Her Beauty Gained Her Everything She Ever Dreamed Of…” a sculpture made of cherry, black walnut, ash, cypress, tigerwood and steel.

“I don’t pretend to be an expert in psychology, but I have noticed that very beautiful people in general have certain challenges that other people don’t have,” Schellenberg said. “We often think that beautiful people have it made. We see them as perfect and having no challenges whatsoever. This piece is about my observations of the challenges they do have.”

The child that is visible from the back of the sculpture is one example of a challenge faced.

He used different species of wood for the different colors which he glued together and then shaped. The dress and shins are made of cherry wood, her skin is the black walnut and the blonde wood is cypress.

He found out about this competition through an email and decided it was in the range that he was willing to travel if his piece was chosen.

According to Schellenberg, this piece is the only one he has in his current portfolio; his first sculpture in about 25-27 years. He took some time away to be a missionary with his wife in Hungary and then came back to the states to homeschool his two children but is currently working on his next sculpture and has plans for at least seven more. 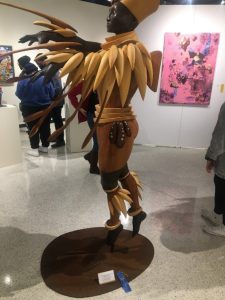 Second place went to Gary Chapman, an artist and professor at University of Alabama at Birmingham, and his piece “WO MAN”.

“’WO MAN’ is meant here as a springboard into a larger conversation that I might be having with my daughter about, gender identity, social pressures, how to react, respond or ignore,” Chapman said.

This piece features the female torso that is taken directly from Robert Graham’s female torso sculpture for the 1984 Olympic Games gate into the arena.

Chapman chose to enter his piece into the competition because of how few regional-based national shows are and the fact that he finds the audience of university galleries to be much more interesting and engaging.

As a professor, he loves helping beginner painters learn a command of the language of paint and then facilitating intermediate and advanced painters in finding their unique voice.

“WO MAN” is one of nine pieces in his CONVERSATION Series. He entered two of these works into this competition. 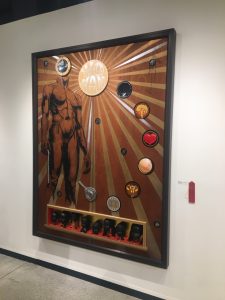 WO MAN by Gary Chapman

Cummins hopes that the piece can draw attention to struggles faced, which represents those being forced to leave their home due to climate change.

“I’ve tried to create an allusion of a past using a dead flower-like motif being cast off and left behind as the figure rides away from the horizon instead of toward it,” said Cummins. “I think this illustrates an unknown future. Not a hypothetical happy ever after. The outcome of climate change and migration is represented by this amorphous grid like ‘person’ riding a strange creature. The grid itself symbolizes a confused mental process. The grid all twisted, depicts uncertainty and irregularity where there should be meticulous precision, as in, we think we know, we think we have control. The rider is literally along for the ride, unable to control the direction but the legs of the animal are not shown to be walking, just standing still, this is the conflict where stasis opposes movement. I use this idea of conflict, our inability to escape throughout much of my paintings and liken it to an event horizon.”

“Fancy Shoes” is her way of saying we are not confronting the reality of climate change.

She entered two other pieces into the show that were not chosen, but she is always looking to enter shows that are relatively local to her to showcase how serious she is about her work.

“It’s really special when something like this happens and to win an award on top of that is fantastic especially when the work in the show is as good,” Cummins said. 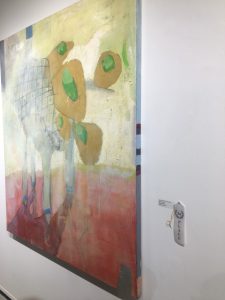 Fourth place went to “Buttons the Chicken Teapot”, a found teapot made of polymer clay and buttons by Layl McDill of Minneapolis, MN.

“For me making my art helps me keep this magical doorway to wonderment open. I am drawn to imagery that sparks that feeling of unknown and mystery like cupboards, drawers or placing everyday objects in an incongruent setting,” McDill says according to her website.

She uses primary polymer clay with a technique called millefiori, which is a technique that uses small images that covers the sculpture.

McDill also uses found objects from thrift stores and asks herself all kinds of questions while creating so that the viewer of the completed piece can then ask their own questions. 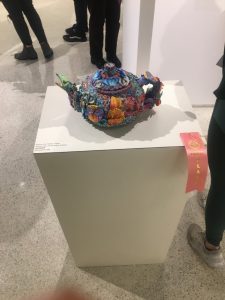 Indi Farrakhan, another artist of the show travelled all the way from Akron, Ohio for the opening of the event.

His piece titled “UltraBlack” is an oil painting that tells a visual story about a Phyllis Harris, an Executive Director of the LGBTQ+ Community Center of Greater Cleveland. By speaking to her, he found the inspiration for how to move forward with activism. 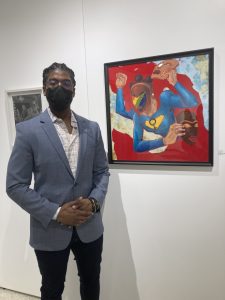 Indi Farrakhan with his piece “UltraBlack”, an oil painting

Blake Pearce, Dean of the College of Arts spoke on the show as being more eclectic, featuring artists all over the country. Dean Pearce, being a printmaker himself, was excited to have such an array of media present, especially the 3D models.

“Part of making the best exhibition is that the juror has to have a vision about how the show comes together,” said Pearce.

Samuel Dunson, the juror and award-winning Professor of Art at Tennessee State University, spoke on how he crafted a show by putting his likes and dislikes aside and focusing solely on the merits of each works’ media, style or concept allowing like pieces to go against like until the final round, and eventually technique craftsmanship and professionalism shown through.

Dunson’s vision for the show was diversity and portraying a sense of what’s happening nationally.

“My concept of judging diversity doesn’t mean a quota for race, gender, and/or ethnicity,” Dunson said. “I mean more of visual diversity. Diversity of styles, media, and concepts was paramount over everything else. I knew that if I trusted this vision, then more than likely, other forms of diversity would find their way into the show.”

The Valdosta National 2022 will continue to be held until Feb 4.

Visitors who wish to view the show can contact Julie Bowland, Gallery Director (229) 333-5835 or jabowlan@valdosta.edu  to schedule a guided tour of the exhibition. Otherwise, the gallery is open, subject to staff availability, Monday-Thursday from 8:30am-5:30pm, and Friday: 8:30am-3pm.

The next show held by Dedo Maranville Fine Arts Gallery will feature the works of Juror Samuel Dunson starting Feb. 14.