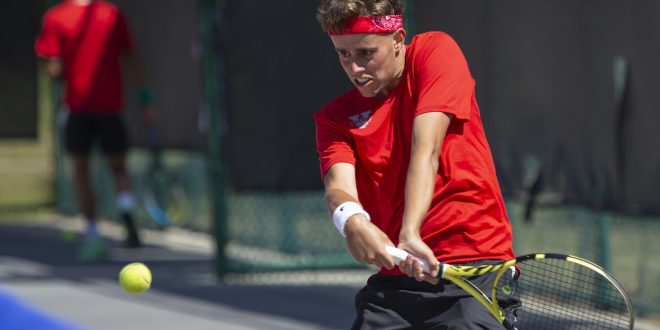 The VSU tennis teams opened their spring slates with matches against Georgia College in Milledgeville, Georgia, on Feb. 1.

The men’s tennis team picked up where they left off last season, a season that saw them winning the Gulf South Conference tournament before losing to West Florida in the NCAA South Regional.

The men’s team swept the Bobcats in doubles to secure the first point of the match. That included a 6-0 shutout by freshman, Lamar Bartley, and junior, Christian Felline.

The men’s dominance continued into singles with the team taking five of the six games. Bartley was the only Blazer to fall in singles, falling in two sets 7-6 and 6-2.

None of the singles matches went to three sets as the men’s team made a statement against the Bobcats.

Following Bartley’s loss, the Blazers finished off the Bobcats, winning each of the final three matches. Sophomore, Christian Wedel secured the match win with a 6-0, 6-3 win over Masumi Komada.

The women’s team put up a hard-fought fight in doubles, but ultimately lost the round 2-1, giving the Lady Bobcats a 1-0 edge. Freshmen Natalie Kohoutkova and Magda Tuells Bonet won a thrilling set against Emilia Richter and Emma Fleming, winning 7-6.

In singles, following Kohoutkova’s 6-1, 6-1 win over Sofia Shing to tie things up at 1-1, the Lady Bobcats won the next three matches to secure the win.

Previous Are people enjoying the uprise in films about existential crises?
Next Friendly neighborhood Spider-Man stays at the top