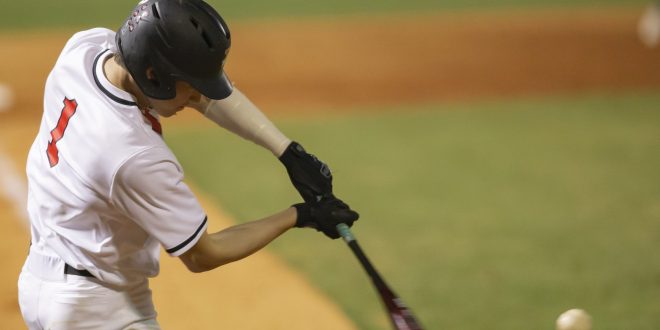 Blazers win 3 of 4 to close out home stand

Thanks to some hot hitting from the top of the batting order, the Blazers notched wins in two out of three games over the weekend in the Gulf South Conference opening series against the Alabama Huntsville Chargers.

Junior first baseman E.J. Doskow has been on fire for the Blazers to start the season, and the Chargers felt the heat as Doskow knocked in eight runs across the three-game series.

Doskow currently sits third in DII in total RBIs, and his 24 on the season lead the GSC. He was also awarded Co-GSC athlete of the week for his efforts which also included going 7/11 with two walks overall, while also scoring five runs himself.

Shortstop Ryan Romano also had himself a weekend in the no. 2 spot in the Blazers order, going 8/11 and scoring seven runs, mostly courtesy Doskow’s bat usually in the three or four spots. Romano has 17 runs scored already this season for the Blazers which puts him third in the conference.

But as important as the Blazer’s bats were over the weekend, it was their defense that stole the show in game one with a 7-0 victory.

It started on the mound with GSC pitcher of the Week Elijah Gill. For the second time in his three games so far this season, Gill held his opponent scoreless in the win.

This time, over seven innings of action, Gill allowed eight hits and no runs while striking out six. Gill’s .53 ERA so far this season is the second lowest in the conference among starters, while his 19 strikeouts rank fourth.

Sophomore reliever Scott Curran came on in the eighth inning to give the Blazers two more frames of shut down pitching. Curran has only allowed four hits in his seven innings of relief work this year for the Blazers.

The Blazers got out to another hot start against the chargers in that first game, going up 3-0 after each of their first three batters reached base and then scored. Doskow recorded two RBI and a run in that inning alone.

As a testament to the impressive start that a couple of Blazers hitters have gotten out to, seven times this season the Blazers have gotten at least two runs on the board before the second inning.

While the defense hasn’t held up in every one of those games this season, it certainly did in this one, as a lightning relay in from Luke Ard in left field snuffed a runner at home plate in the second inning to save a run.

The Chargers saw only one other probable scoring opportunity with multiple on and one out in the seventh. However, in his last inning, Gill buckled down and threw strikes, catching Dylan Johnston swinging and then getting a fly ball foul into Bryson Gandy’s glove in right field to strand two chargers in scoring position.

Game two started out similarly for the Blazers, but things got rocky as the game went on and ended in favor of the visitors 8-5. Doskow notched two more first inning RBIs with a home-run hit off Chargers starter Tyler Self, but Self had the last laugh.

Self-netted a win for himself and the Chargers going all seven innings against the Blazers allowing five runs, four earned, seven hits and five strikeouts.

On the mound for the Blazers was JJ Finn in his third start. Through his first four innings, he kept the Blazers in control, allowing only four hits, although one did get through for a Charger’s run in the top of the fourth inning.

In the top of the sixth, however, things started to unravel. Finn allowed the leadoff on with a two-strike single, and then Brennan Vasquez connected on his second home run of the season to bring the Chargers within a run, 4-3.

Three more Blazer pitchers saw the mound in that inning, but none could do anything to stop the Charger’s stampede. By the time the dust had cleared the Chargers had taken an 8-4 lead behind six hits and seven runs in a disastrous sixth inning for the Blazers.

The Blazers managed to get another run on the board before the seven-inning game ended, but they fell a couple short in the end, falling in game two 8-5.

The rubber match was capped off with an 8-4 Blazer win on a beautiful sunny Sunday afternoon.

Junior Blazer’s starter Kevin Thomas did his job on the mound holding the Chargers to two runs in four innings, but the Blazers got on base more times this game than they have all season.

The Blazers 12 hits are their second most in a game this season, and the same can be said for their eight walks. Tack on the two errors and a couple hit batsmen by the Chargers, and ever batter in the Blazers lineup reached base at least once.

The first six in the Blazers in the batting order did the bulk of the damage, combining to hit 11/ 24 (.458) on Sunday, with EJ Doskow leading the way again.

Doskow was perfect at the dish with three hits and two walks on the day, while also adding three RBI to his GSC leading total.

Doskow’s first RBI came again in the opening frame when he scored Romano with a single, but then Tommy Thomas Park was quiet until the bottom of the third.

That’s when Romano got the Blazers started off again with a leadoff double, his second of the day. Three more consecutive hits followed, include a two-RBI double by Doskow.

Ard scored Doskow with an outfield single, and then consecutive errors from the infield would score two more before the Chargers could escape the inning. The Blazers used four hits and two errors to run up five runs that inning.

The Chargers scored on a ground rule double in the next frame to make it 6-1 and added another run in the fifth inning, where Kevin Thomas’s day ended.

Blazers reliever and weekday starter Brandon Raiden came in and got the win in his 3.1 innings of action.

Raiden allowed a run in the fifth and two more unearned runs in the seventh, but only one hit. With the Blazers hitting like they were that was more than enough for the win.

The Blazers also hosted non-conference Georgia Southwestern Tuesday and got another win thanks to double digit runs from the offense.

In an 11-5 victory the Blazers got batters on base over 20 times for the second straight game. And they started early again, jumping on GSW for three runs in the first inning, and going up 7-0 by the end of the fourth.

Doskow collected a couple more RBI on the day, going 1/3 on the day with a walk. Ard hit 4/5 with 3 RBI and JJ Clotida added two more hits.

Graduate student pitcher Adrian Garrastazu was lights out in his first start of the season, allowing only one baserunner in four innings, striking out five and walking none.

With the win the Blazers improve to 7-4 on the season and are currently tied at third in the GSC with a 2-1 conference record.