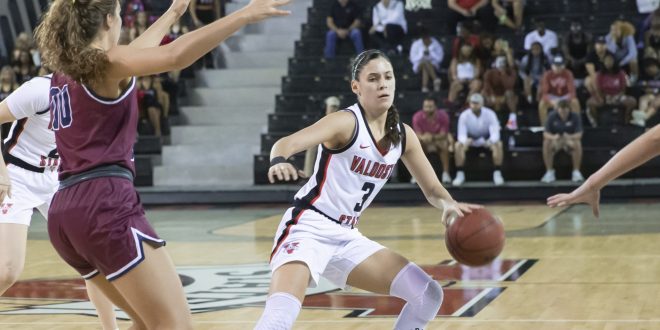 The Lady Hawks of Shorter University were no match for the streaking Lady Blazers in the Complex Saturday afternoon. The Lady Blazers cruised to their seventh straight win against the 4-14 Lady Hawks, 77-35.

With their second 40-point win over the Lady Hawks this season, the Lady Blazers improve to 21-4 holding tight at second in the Gulf South Conference with a 16-2 conference record.

Despite the streak, the Lady Blazers have been unable to gain any ground on first place Union, who has won their last 18-straight and stands unbeaten in conference play.

The Lady Blazers wasted no time against the visiting Hawks, opening the game with 11 straight points.

Scoring nine of those first 11 and 51 of the 77 total points were the Lady Blazer’s four graduate students, who were recognized and celebrated prior to the game.

Leading the way was forward Nicole Heynn with 21 points and 12 rebounds.

Center Kwajenlin Farrar not only locked down the paint for the Lady Blazers, holding their opponent to only 2-23 shooting on non 3-point attempts, but also scored 14 points and grabbed nine boards.

Backup five Mallory Odell finished with an efficient 11 points and three rebounds, while Delany Bernard hit a three and a layup during that first quarter run for her only points of the game while adding four rebounds and three assists.

After that 11-0 run to open the game, the Lady hawks responded with some 3-pointers and hit some free throws to suddenly make it 15-16 early in the second quarter.

But from the opening tip, the Lady Blazers never surrendered their lead. They responded with a couple quick layups to push the lead back to five with seven minutes left, and from there allowed only one more basket to the Lady Hawks that half.

The Lady Blazers took a 38-18 lead into the half, and in the second half they managed to steadily increase that lead even further by forcing turnovers and turning them into layups.

They got into the paint to score a lot in general on Saturday, resulting in a staggering 38-4 Blazer advantage in points in the paint.

One way to keep a team from coming back is to keep them from even having the ball, and that’s what the Lady Blazers did as the lead ballooned to its largest, 42, on the final score of the game.

It was yet another impressive defensive outing for the Lady Blazers. As the best defensive team in the GSC this season, this marks the fifth time this season they’ve held a team to 40 or fewer points.

The Lady Hawks finished with only nine made field goals in the game, seven of them being 3-pointers.

Sophomore point guard Tamiya Francis was very impactful for the Lady Blazers on both ends, leading the team with six assists and four steals, while also adding an efficient 13 points, going 2/3 from deep.

After that they’re scheduled for a home playoff game in the GSC tournament quarterfinals on “super Tuesday” March 4, against an opponent to be determined.