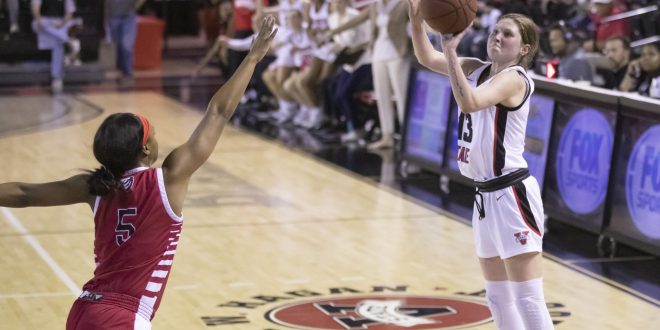 After the letdown they experienced in the semi-finals of the GSC Tournament earlier this month, the VSU women’s basketball team came into Tennessee with something to prove.

They got that chance Friday afternoon, when they took on the No. 2 seed in their region of the bracket, the Tampa University Spartans.

They did prove something as the Lady Blazers toppled the Spartans 59-50, advancing to the second round of the NCAA Division II Women’s Tournament.

The Lady Blazers were led, as per usual, by graduate student Kwajelin Farrar, who turned in a stat line of 15 points, eight rebounds and 7-11 shooting from the field.

The rebounding battle was the biggest difference between the two teams, as VSU snagged a 38-21 advantage. With 12 of those being on the offensive end, the Lady Blazers were able to consistently outhustle and outmuscle the Spartans to second chance points.

While VSU was decent on offense, they excelled on the defensive end, holding Tampa well below their season averages in most offensive categories.

The Spartans came into the tournament averaging 67.9 points per game and shot 46.4% from the field and 33% from beyond the arc. However the Lady Blazers clamped down and stifled their offense all game, holding them to 36% from the field and just 27% from three.

While Farrar led the team in the post, graduate student Delaney Bernard had herself a game from range, scoring 12 points and hitting four threes. This provided the space Farrar needed to operate down low.

In addition, sophomore Tamiya Francis had a strong stat line of 11 points, five rebounds and four assists, she struggled a bit from the field.

While the Spartans were without star senior Dori Nagy, their other double digit scorers did little to help fill her shoes.

LaShayla Wright-Ponder had the best game of the three, posting ten points and eight rebounds on 4-8 shooting. However, Aliyah Abney and Melijiah Sullivan both succumbed to theBlazers defense, shooting a combined 11-34 from the floor.

The Lady Blazers already know their opponent in the second round: the No. 3 seed Lee University Flames.

Lee eliminated the Lady Blazers from the GSC Tournament last week, 74-61. The game will tip off on March 12 at 6 p.m.

Update: The Lady Blazers defeated Lee 70-44 and advanced to the Sweet Sixteen, where they will face No. 1-seed Union (28-2).

Previous Photos: What I wish I knew before coming to college
Next Candle Palace comes to Valdosta