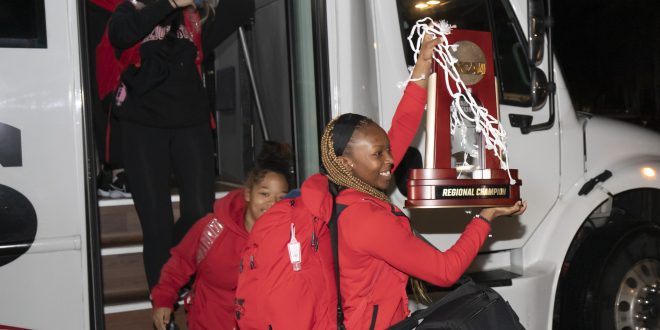 The Lady Blazer’s incredible season came to an immature end Monday in Birmingham, as they fell to the Western Washington Lady Pioneers 58-55 in the Elite Eight.

The Lady Blazers came into the NCAA Division II Tournament as a 7-seed, but rolled through the first three rounds, defeating each of the top three seeds in the South Region.

That earned them a 4-seed in the Elite 8, where they ran into a near copy of themselves in 5-seed Western Washington (24-5), a defensive juggernaut that forces miss and crashes the glass.

And the game lived up to its expectations as two of the best defensive teams in the nation faced-off and neither cracked 60 points. The Lady Pioneers came out on top by winning the rebounding battle 39-26 and outshooting the Lady Blazers 43% to 34%.

Another deciding factor was points in the paint, where the Lady Pioneers also led 34-18. Both Blazer bigs, Mallory Odell and two-time GSC first teamer Kwajelin Farrar picked up three fouls in the first half and played the second half in foul trouble.

That allowed the Lady Pioneers to start pounding it inside, and it worked, as they took their first lead of the game late in the second quarter and led 57-53 with less than a minute to play.

Freshman guard Taylor Searcy hit a pair of free throws to make it a one score game with enough time on the clock to get the ball back. In the biggest moment of the season, the defense came through and got a stop, and Blazer head coach Deandra Schirmer called a timeout.

With the clock under ten seconds, Searcy drove to the basket with a chance to tie it and had the defender back-pedaling.

As limbs got tangled and bodies hit the hardwood, the whistle blew, and it was Searcy called for the foul, a travel. With the help of her teammates, she got back up off the floor and headed back on defense to try and foul as quickly as possible.

They needed three fouls to get into the bonus and send a Lady Pioneer to the stripe. That Lady Pioneer was freshman Riley Dykstra, who’d just sunk a back breaking corner three to give the Pioneer’s a two-possession lead inside a minute to play.

She left the Lady Blazers with a glimpse of hope as she went one-for-two at the line. A 3-pointer from the Lady Blazers could have tied it, but with only 2.7 seconds left, they tried one-too many passes and didn’t get a shot up before time expired.

Searcy scored 14 points in the game to cap off a phenomenal tournament, where she averaged nearly 14 points per game across the last three rounds, up from seven in the regular season.

Nicole Heyn led all Blazers with 18 points and seven rebounds to cap off a great season where she earned first team all-GSC honors.

Farrar added eight points and seven rebounds, but she was outrebounded by Lady Pioneer center Brooke walling, who led her team with 11 boards. She also led them in scoring with 14 points.

The Lady Pioneers finished with four with double-digit scoring, and it was all divided fairly evenly Mollie Olson scoring 11, and Riley Dykstra and Emma Duff adding ten apeice.

Heyn and Odell both came to VSU this year, and both were instrumental in the 26-6 record the Lady Blazers earned, one of the best in school history.

Previous Kanye doesn’t go ‘Eazy’ on Pete
Next Editorial: Is VSU doing enough to be a sustainable campus?