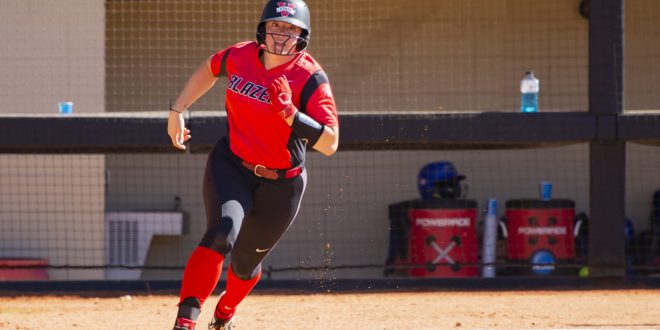 It was a dominating all-round performance for the Lady Blazers, who outscored Shorter 25-1 over three games. Additionally, all three games were run-ruled.

The Lady Blazers started off the series, hitting four home runs in game one on Saturday.

Following a single by sophomore first basewoman Aniston Gano, junior outfielder Abby Sulte rang off a home run to give VSU a 2-0 lead in the bottom of the first inning.

A brief dry spell occurred during the second and third inning, as neither team had much success at getting runners on base.

That’s when the Lady Blazers broke through in the fourth inning, tacking on three more runs to their lead. Senior shortstop Nikki Pennington ripped off a dinger that went yard to set the tone for the inning.

Later in the inning, junior catcher Taylor Lewis homered to bring in herself and junior pinch runner Hunter Meadows to give VSU a commanding 5-0 advantage.

The Lady Hawks would finally get on the board in the sixth inning, scoring off an error by Gano. However, it would not be nearly enough to overcome the deficit.

A pair of home runs by sophomore centerfielder Morgan Hill and graduate third basewoman Ally Clegg put VSU up 7-1 in the bottom of the sixth.

Later in the inning, with bases loaded, sophomore second basewoman Taylor Macera brought in the two game-sealing runs via a single to left field.

Junior pitcher Samantha Richards had a strong performance for the game, recording 11 strikeouts while only giving up three hits.

The Lady Blazers’ clamping of Shorter continued into Sunday’s doubleheader.

The Lady Blazers once again got the scoring started with a first inning home run, this time from Clegg.

Similar to game one, there was a halt in scoring during the second and third innings. However, Richards kept the Lady Hawks at bay, recording five of her ten strikeouts during the stretch.

The scoring picked back up in the bottom of the fourth inning, where the Lady Blazers scored five runs. Pennington was able to reach home following an error by Shorter’s Payton Tuder.

Hill then brought in three more runs with a double down the right field line. Hill herself was able to score later after a double from Gano.

The Lady Blazers capped the game off in the fifth inning on a bunt by redshirt senior leftfielder Baylee Everson. While it allowed Macera to score, it also brought in Meadows, who reached home following a throwing error by Shorter’s Madison Pettigrew.

Despite only having four hits for the game, the Lady Blazers were able to get on base ten times thanks to walks.

While the Lady Blazers did continue to pour it on offensively in game three, it was sophomore pitcher Mia DeAngelis’ no-hitter and the Lady Blazers’ defense that defined the game.

DeAngelis recorded her fourth win of the season to the tune of three strikeouts and just one walk in facing 15 batters.

Offensively, a pair of home runs from Clegg and Gano got the scoring started in the first inning. Gano would score another run in the third inning off a single from Sulte to put VSU up 3-0.

Later in the inning, following Meadows’ bunt that advanced Macera to third base, Hill doubled to center field, bringing in both Meadows and Macera. The runs put the Lady Blazers up 6-0 at this point.

Much like the second game, the third game was finished off in the fifth inning.

With bases loaded, Meadows was inadvertently walked, allowing Pennington to score. A pop fly by Hill capped the game off as Everson was able to reach home.

For the Lady Blazers, they will look to remain unbeaten in conference play when they travel to Clinton, Mississippi, to face Mississippi College for a three-game series on March 26 and 27.