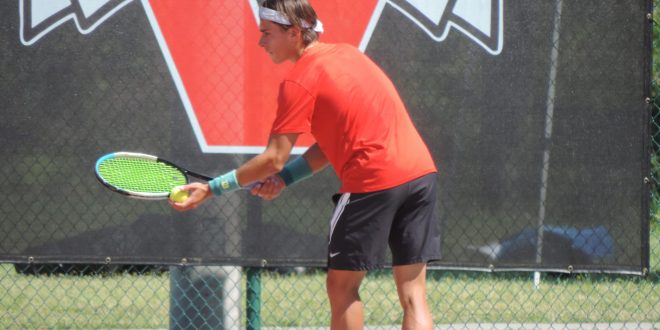 The VSU tennis teams squared off against Lynn in nonconference action on March 25 at the VSU Tennis Courts.

The Blazers started the match off with a win in the doubles portion.

The sophomore duo, Luca Mack and Rodrigo Carvalho, picked up a 6-2 win over Lynn’s Ignacio Martinez and Will Kirkman.

Sophomores Christian Wedel and Cameron Henricy Trigolos also picked up a 6-2 win in their match against Ryan Neale and Nicolas Cabrera.

The Blazers’ strong start continued into the singles. Wedel scored the first point with a 6-3, 6-1 win over Gianmarco Amatiste.

Lynn scored the next point via Baptista’s 6-4, 6-1 win over Bartley. However, the rest of the match went in the favor of the Blazers.

Mack’s 6-3, 6-3 win over Gonzalez gave the Blazers a 3-1 edge, and Felline’s 6-3, 6-2 win over Rayane Alami gave VSU the victory. Carvalho’s match against Martinez and Trigolos’ match against Carbrera went unfinished.

For the men’s team, the victory was a pivotal one for postseason positioning.

“It puts us back in the hunt,” head coach John Hansen said. “In our region right now, the Sunshine State Conference and the Gulf South Conference are the top two conference in the region. Our region has, I think, nine of the top ten teams in the region, and probably 14 of the top 15. It’s gonna be a dogfight.”

The Lady Blazers were without two of their top players for their match against Lynn, which proved to be a vital difference for the match.

“We were without our number one and three girls,” Hansen said. “Number one has a hurt elbow. She fell. She’s been out for a couple of weeks. Number three is in the bed with the flu. Still, we were in the third set. We were winding up, so it would have been a close match.”

As it was, the women’s team dropped the doubles portion.

Adriana Barrio fell in her match against Pignato, giving the Lady Fighting Knights a 2-0 advantage. Lynn went up 3-0 with Lapustina’s win over Saving.

Lynn won the match via a 6-2, 7-5 decision between Cibarkova and Andrea Barrio.

Still, the Lady Blazers put up a fight in the unfinished matches.

Bonet and Starreveld each split their games against Wagner and Bihel. Freshman Elisa Beau also played had a solid performance in her unfinished match, finishing 3-6, 6-4, 1-1 against Podbiol.

Despite the loss, Hansen was proud with the fight the shorthanded women’s team put up.

“They’re a very young team,” Hansen said. “They’ve got the talent, but now they need the confidence. There was a spark there. A fight that we haven’t seen from them this year, and most of it was because of that experience.”

The men’s and women’s tennis teams will travel to Pensacola, Florida, for a four-match stand against Christian Brothers, West Georgia, Mississippi College and West Alabama on April 1-3.

Previous Photos: Greek Week comes to a close with Field Day Games
Next Guide: How to budget money as a college student