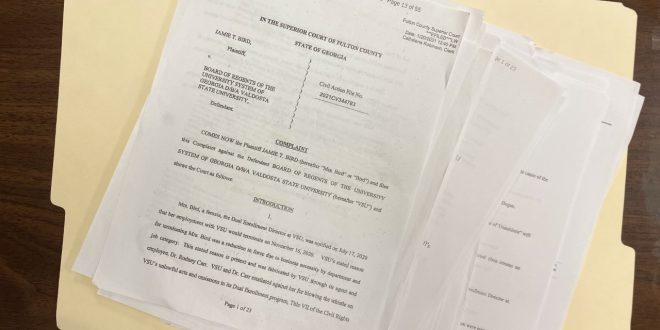 Photo of the lawsuit

Former VSU employee files lawsuit against the Board of Regents

The Board of Regents for the University System of Georgia is being sued by a former VSU employee, who is alleging a VSU administrator sexually harassed her and tampered with her employment status.

Jamie T. Bird, who served as VSU’s dual enrollment director until her dismissal on Nov. 16, 2020, made a series of allegations against Dr. Rodney Carr, vice president for student success, in the lawsuit.

Bird is seeking her job back and for Carr to pay at least most of her legal fees and damages for emotional distress and loss of enjoyment of life.

According to the lawsuit, Bird pushed away and walked toward the door, which led to Dr. Carr allegedly reacting angrily and asking why she would do that.

In a document filed by Dr. Carr’s defense, he recalled the incident but denied the description of the interaction as a “full body hug.”

A large part of the suit hinges on an e-mail Bird sent later that month. On Feb. 26, 2019, Bird sent an email to high school counselors regarding dual enrollment.

According to the lawsuit, the email is described as Bird’s attempt to assist high school counselors in meeting the advising and counseling requirements of the dual enrollment program.

Dr. Carr reportedly stated that he did not want to discuss the matter with Bird herself until he had completed “damage control.”

According to the lawsuit, Dr. Carr denies these allegations.

Bird alleged that on March 6, 2019, she and Mitchell were summoned to Dr. Carr’s office to discuss the email. Bird reiterated its importance to which Dr. Carr responded with speculation that VSU President Carvajal was going to fire him because of it.

Dr. Carr alleges that it was Bird and Mitchell who requested the meeting and denies that he commented on the possibility of being fired over the email.

The lawsuit alleges that Dr. Carr wrote a reprimand for her and told her that he would keep it in his desk drawer in case she does “something stupid” again.

Dr. Carr denies both writing a reprimand and making the derogatory comment.

On March 13, 2019, Bird was summoned to the office of VSU Human Resources officer, Jeanine Boddie-LaVan.

Boddie-LaVan issued a reprimand to Bird dated March 5, 2019, stating that she had done irreparable damage to VSU by sending the previously mentioned email.

According to the lawsuit, Bird asked Boddie-LaVan for a follow up meeting to discuss the appeal process. Boddie-LaVan agreed but never followed through.

Dr. Carr alleges that it was Mitchell, Bird’s direct superior, who wrote the reprimand and claims that Bird was provided the necessary information.

Around Nov. 8, 2019, Bird reportedly received a notice that she had been demoted via an HR “job reclassification,” although Dr. Carr denies that this ever happened.

Between Dec. 4, 2019 and Jan. 6, 2020, Bird reportedly met with Mitchell and Ryan Hogan, VSU director, to discuss the reclassification of her job back to a position that fit her duties and merits.

Mitchell resigned from his job around Jan. 2, 2020 due to a hostile work environment caused by Bird’s demotion and “the Dual Enrollment counseling email,” according to the lawsuit.

On his way out, he requested that Bird be reclassified as the associate director of admissions.

Dr. Carr reported in defense that he does not know whether or not this meeting took place and acknowledges that Mitchell did submit his resignation. He denies that it was due to a hostile work environment.

On Jan. 22, 2020, the suit alleges Dr. Carr entered Bird’s office unannounced and made conversation. He reportedly told her “I hope we can move forward.”

Bird reportedly said she needed her “job description and classification corrected to reflect her actual job and duties.”

She alleges that Dr. Carr informed her that she and all of Dual Enrollment would be transferred away from admissions to The Office of Transitions to report to Rob Freidhoff, associate vice president for student success.

Dr. Carr said that he only told Bird that her reporting structure was changing, not her job itself.

“The Office of Transitions” is a non-existent department, according to the lawsuit.

According to the legal documents, only Bird was sent to this new department.

According to the lawsuit, Rob Freidhoff was a “straw supervisor” designated to fire her once she was distanced from Dual Enrollment and Dr. Carr.

The stated reason for her termination was “reduction in force” despite there being two new positions made available by the Admissions Office to cover Dual Enrollment needs. The combined salary of these two positions equaled more than Bird’s salary at the time of her termination.

He also reported that Bird was given a termination letter but explains that the two new positions were lower level and not created to take over Dual Enrollment.

The Spectator reached out to Dr. Carr and Bird for comments but has not received a response from either.

Previous Logan Lee & the U-Pang Band return to Valdosta
Next Editorial: Will Smith Oscars controversy blown out of proportion