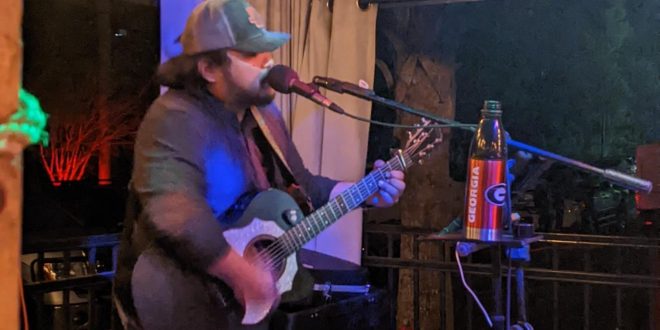 On Apr. 1, Logan Lee & the U-Pang Band returned to The Salty Snapper in Valdosta and gave the audience an unforgettable show.

Logan Lee & the U-Pang Band is completely managed and made up by Logan Lee, who has been singing his whole life but only learned guitar after becoming bed-bound due to a torn ACL.

Lee has been performing professionally since the 2010s and has no plan to slow down now. Originally from Illinois, Lee now resides in Jefferson, Georgia. He travels all over the states to give people a taste of his amazing musical ability.

He calls his style “sweet lyrics and style of Country with just a touch of rock.” Friday night showcased exactly that.

He started off the night with a mix of country and 2000s alternatives: “Wagon Wheel” by Old Crow Medicine Show, “3 A.M” by Matchbox Twenty, and “Drift Away” by Uncle Kracker.

Lee imminently captivated the audience with his voice and amazing guitar skills, getting everyone singing along in no time.

He played “Hotel California” by the Eagles, “Mamma Tried” by Merle Haggard, and “Purple Rain” by Prince. Lee did not hold back on putting his “country-fried twist” on these classics.

His energy was contagious, keeping the crowd captivated, clapping and singing with every new song he sang. He even brought two different people on stage to sing with him, making everyone enjoy the show even more.

The show started at 7 p.m. and lasted till 10 p.m, and Lee did not miss a beat as the crowd got bigger and bigger watching him perform.

People loved every bit of his show, calling it “one of the best performances they’ve seen in ages.” Another man called Lee “a star in the making, don’t take your eyes off this guy.”

Lee has music on Soundcloud @U-Pang Band and shares his live performances on his Instagram @upangband. For any other information, he posts updates on his website www.upangmusic.com/