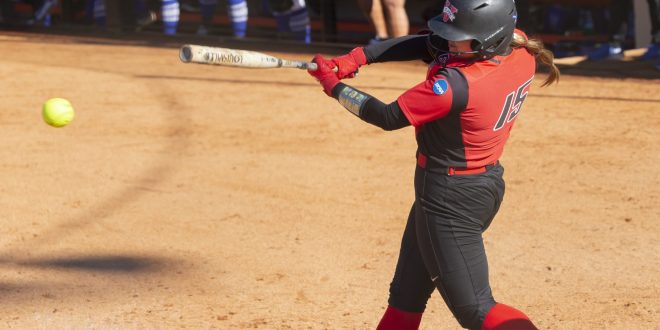 Aniston Gano has been a key to the VSU softball team’s success this season and has made it clear she is the player to watch.

The Lady Blazers are currently 27-5 and 19-1 in Gulf South Conference play with the team being on a six-game winning streak.

Gano, a sophomore from Lakeland, Georgia, is second on the team in batting average, RBIs, hits and home runs. Taking on first basewoman duties, Gano has a batting average of .388 and nine home runs this season.

Last season, when Gano was playing as third basewoman, she played in 49 games, starting in every game. Gano also went 43 of 125 of the plate for a .344 batting average.

“I grew up watching Courtney Albritton and several others,” she said. “I would go to the games and film her on my iPod. It was fun watching her play.”

As Albritton served as motivation for a young Gano, Albritton made it clear that winning was also. Their success this season has come easy as the team is much like a family.

The bond that Gano shares with her teammates helped them win the 2021 South Region Tournament.

Gano shares that going against West Florida was an experience she will never forget.

“West Florida was undefeated, and we beat them twice after losing to them,” she said.

Katie Proctor, another first basewoman, is best known for being Gano’s right hand woman. Gano expressed how people wondered how she and Proctor could be such good friend when they play the same position.

Proctor spent time teaching Gano how to cover first base, where she is needs to go when the ball hits a certain place and was not selfish at all with her knowledge of the position. Head coach Thomas Macera was very influential in Proctor’s softball career, and he often gave her advice.

“Trust your hard work because we come out here every day and practice hard, and we practice with intention of doing well every weekend,” Proctor said. “Even if we are struggling, we have to trust what we know.”

When speaking to Proctor about her teammate Gano, she states nothing short of kind words for her.

“She is encouraging, funny, hardworking and thoughtful,.” she said.