Home / Opinions / Progress in the eyes of a Lady Blazer 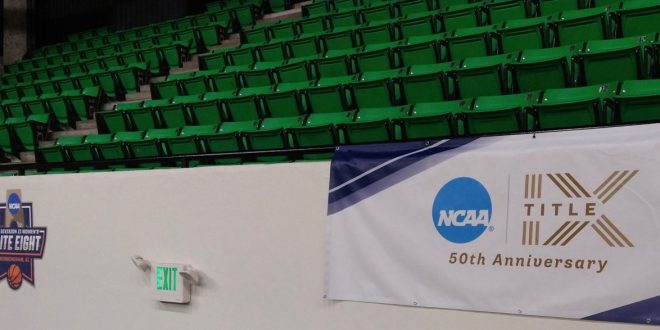 Written by Grace Beyer, Special to the Spectator. Photo courtesy of Grace Beyer.

As I jog out of the locker room, around the corner and out toward the gymnasium, I look around. In front of me, a couple of my teammates line up by a big sign that reads “Nease High School Women’s Basketball Game at 6 p.m.!”

My coach rolls the basketball rack toward us; our cue to grab a ball and prepare for warmups to start. The loudspeakers above blast our favorite pregame hype song, and I bounce a basketball between my legs in anticipation.

To my dismay, the bounce of basketballs, the sound of the music, and the humble voices of my teammates were the only noises echoing through the gym as we ran out onto the court—unless, of course, you count the athletic trainer in the stands, or the one parent who showed up on time.

It made me feel… empty.

I heard the clink of the bright orange rim on the opposite side of the court as a girl on the opposing team missed a shot. I heard the squeaking of each person’s shoes on the glossy hardwood floor.

The only thing preventing me from hearing the low hum of the ceiling fan was my voice and my teammates’ voices. It felt as though our voices were essential—essential to avoid the inevitable silence that would arise without them.

While my team enjoyed large crowds every once and a while, stagnant, silent crowds like the one on this night were never a surprise. I was always disappointed but never surprised.

Slowly, but surely, some of our parents trickled into the gym. The game began and my mind zoned into the task at hand: winning.

Fast forward two years. New to collegiate athletics, I did not know what to expect.

Would men’s and women’s sports be valued equally? Would people fill the stands during our games? Would my team earn respect from the local community?

These thoughts lingered in my head as we progressed through the season. Sometimes, my dreams of big crowds and supportive fans were overwhelmingly met. Sometimes, they were not.

For decades, people have drawn a line between sports and “women’s sports.” In recent years, women’s sports have made considerable progress toward equality with men’s sports. As women in sports continue to dominate, heads are turning.

The stigma around women’s sports has existed for years, and its shackles are finally falling.

Women are speaking up, standing up for themselves, and earning the respect that they deserved all along.

Valdosta State assistant coach, Alexis Uffman describes her experience as a female athlete as “a fight to show you are worthy, when you know all along that you are.”

I do not think I could have phrased it better myself.

Attendance and Support for Women’s Sports

“Tonight is going to be packed,” my teammate exclaimed as we changed into our game uniforms.

It was Tuesday, March 1, and my team was playing West Alabama in the Gulf South Conference quarterfinal game.

Rumor had it the football team, dance team, cheer team and other sports teams were coming to watch. I knew the supportive fans in the fire-pit would also make an appearance.

I imagined the Valdosta State Athletic Complex packed. As I pictured hundreds of black seats on each side of the court barely visible through a rowdy crowd of fans, my heart rate rose a little.

I tried to wrap my head around the potential volume of all the noises in the gym; music, chatter and cheers echoed through the large arena.

I saw my family and friends waving amongst the cheering fans as my team ran out of the locker room.

Suddenly, I snapped back to reality.

I jogged onto the court, quickly scanning the arena to determine whether it would match my lofty expectations.

I saw the dance and cheer teams in their places near the baseline. I noticed many athletes sitting high up in the bleachers.

Closer to the floor, I saw adults and children showing off their Valdosta State gear. There was a larger turnout than usual.

Although The Complex was not “packed” as I had imagined, the energy in the gym still felt electric. Needless to say, the attendance exceeded my high school games by at least a hundred people.

“Here [at Valdosta State] sometimes people will come for the women’s game and leave for the men’s game and vice versa,” she said. “It’s more about who your friends with, who you know, and who you want to support.”

Despite this non-discriminating support from the Valdosta community, she still acknowledges obvious differences between support for women’s and men’s sports in society.

“When there are differences, not 100% of people are going to be on the same page, all the time,” she said. “There is always going to be someone who doesn’t think that women deserve what we fight for every day.”

On the other hand, Kendall Bollmer, a sophomore guard for the women’s basketball team, feels that gender plays somewhat of a role.

Based on the statistics posted on the Valdosta State Athletics page, the largest crowd for a women’s game this season was 687 people.

On the other hand, the largest crowd for a men’s game was 1140—nearly double the people. While this drastic difference may not be the case for every game, it is important to point out.

As the basketball season progressed/gained traction, my team and I started to notice a slight increase in the number of people in the stands.

The statistics support this observation. There was a slight upward trend in attendance as the season progressed.

Whether this trend resulted from my team’s success, the school’s promotions, or women’s sports’ growing popularity, my team felt the love late in the season.

“Having more people in the stands… is going to allow more little girls to realize what they can be and what they can do with their lives,” Uffman said.

“It would be nice to have more people at our games, but we do appreciate the people that we have,” she said.

Even at the professional level, support for women’s sports is increasing.

Back in 2018, well-known NBA stars started to publicize their support for the WNBA. Among these athletes were Kobe Bryant, Damian Lilliard, Giannis Antetokounmpo, and Jason Tatum.

“Kobe Bryant and those NBA players… have put a positive light on women’s sports” Uffman said. “If you’re a man at home sitting on the couch and your idol says that you should respect women’s sports, then that’s changing a lot of perspectives of people across the country.”

As women continue to make their voices heard through hard work and dedication, it seems the days of empty stands and quiet bleachers are becoming far and few in between.

Circling around the Birmingham Complex, the venue for the NCAA Tournament Women’s Elite Eight, I felt my pupils dilate. There was so much to take in.

Sprawled across the polished, rectangular strips of vinyl were the words “Title IX 50th Anniversary.” How astonishing.

Tracing my memory back to last March, I remembered the unequal treatment of female and male student athletes at the 2021 Division I NCAA Basketball Tournament.

In viral TikTok videos, a female basketball player at Oregon named Sedona Prince highlighted the disparities between the amenities in the women’s and men’s tournament. While the men were granted an entire weight room, the women were given a few yoga mats and some dumbbells.

As more student-athletes spoke out, several more inequalities were revealed. The women also received less in terms of food, gear, and gifts.

The NCAA’s failure to provide the male and female athletes with equal provisions directly violates key aspects of Title IX outlined on the organization’s website.

The videos went viral for exposing the NCAA’s blatant/harsh violations of Title IX: a law the reputable organization claimed to uphold.

Perhaps the NCAA’s celebration of Title IX’s 50th anniversary illustrates an essential turning point in the history of women’s athletics.

“Regardless of what your gender is, we are all human and deserve to be treated equitably,” Holmes said. “I rather use ‘equitably’ than ‘equally’ because sometimes an individual might need a little bit more or less.”

Holmes feels hopeful about the enforcement of Title IX at Valdosta State.

“As far as VSU goes, I think we’ve been doing really well,” she said.

She also acknowledges the university’s efforts to improve how Title IX violations are handled.

“There are some things we’ve been working on to make sure that we do better,” she said. “We made a number of updates to our website recently. I have actually scheduled some trainings with different groups to make sure that individuals are aware of what’s going on, what Title IX is and what their duty and responsibility is as far as Title IX goes.”

Uffman describes Title IX as “another step in the right direction for women.”

“I feel like every single year we’re getting women who are refusing to be silenced, and we’re using our voices, and so we’re getting one step closer to where we want to be in the grand scheme of things—not because people are putting us there, but because we’re fighting for a spot,” she said.

While this is a minor change, it proves that women are strong enough to make the same shots as men.

Bollmer expressed her support for the change.

“They can shoot from there, well so can we,” she said.

Women are strong, women are resilient, and women are capable.

“We are here, we are also human, we are able, we are talented, and we are just like you,” Holmes said. “And that’s what we have to try and understand and … try to make others understand. Until we get to that place we are going to continue to have gender inequality.”

As my thumb scrolls through the Snapchat stories of the day, a loud video blasts through my phone’s miniscule speakers.

Scrambling to turn down my phone’s volume before I attracted attention from those around me, I watch as an enormous crowd storms the court in celebration of one of my team’s postseason wins over a tough opponent.. The sixteen-year-old in me smiled.

My younger self remembered the games when we had to rely our own voices. I remembered the how the women who went before me fought to earn the right to play sports at all.

“Maybe this characterizes the future of women’s athletics,” I thought.

No matter the athletes’ genders, the art of sport is becoming something that people celebrate, appreciate, and cherish. The gap between women’s and men’s sports is shrinking as women stand up for themselves and prove their abilities.

No matter what the circumstances, consequences, or judgements, we need to keep pushing for equality. As we continue to advocate for ourselves as women, progress is inevitable.

Previous Photos: What Should You Have When Studying?
Next ‘Heartstopper’ Review: a must add to your watch list