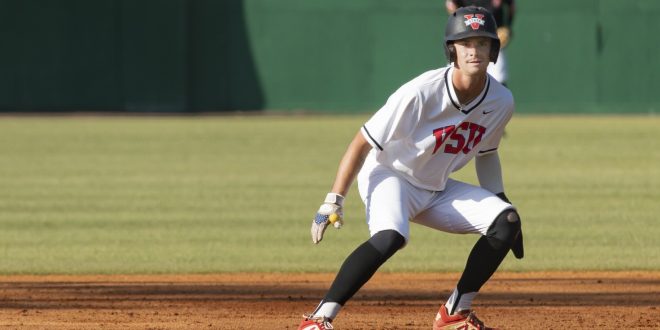 The Blazers needed a win or two. With the Gulf South Conference tournament quickly approaching, the Blazers closed their conference schedule with a weekend series against West Florida down in Pensacola, Florida.

With seeding and positioning on the bracket at stake, the Blazers were able to vanquish the Argonauts 2-1 in the series.

In the only game with any kind of drama over the weekend, senior pitcher, Elijah Gill, continued his incredible season with seven and two-thirds innings while picking up his eighth win of the season, putting him at 8-1 on the year.

While he ceded four earned runs, three came in the seventh inning, with his pitch count already exceeding 100 pitches, and on a home run by Josh Prizina.

Other than that one mistake, Gill was once again lights out. He currently sports a 2.47 ERA on the season with 81 strikeouts in 69.1 innings pitched.

Sophomore JJ Finn and junior Zach Henderson coordinated with eachother to shut down the Argonauts for the remaining inning and a third, conceding only one hit between the two of them.

Henderson entered with two out in the ninth to close out the game and lock up the save, as head coach Greg Guilliams played the matchup game in bringing in the side-arming lefty to face Chris Johnson, the left-hitting right fielder.

On offense, the Blazers took a while to get going as they only had two runs going into the top of the seventh inning. That’s when they blew the game open, scoring four runs to build an insurmountable 6-0 lead.

All four of those runs were courtesy of a grand slam from junior first baseman, EJ Doskow, as he clubbed his ninth home run of the season.

The Argonaut’s starter, Dilan Lawson, pitched a respectable game, going five and one third innings while only conceding five hits and two runs with five strikeouts.

However, his reliever, Hunter Lucas, was responsible for three of the four runs scored on the grand slam as he loaded the bases. Sam Brown then entered the game and gave up the Doskow slam in his first batter faced.

It was a rough start to the Saturday doubleheader for the Blazers. While it was only one bad inning that made the score look lopsided, the Blazers’ offense made for a rough game all around.

Junior Kevin Tomas got the start for VSU, and he remained strong through four innings as he only allowed two runs. Once the fifth inning started, however, everything went awry very fast.

The first three batters of the inning singled and scored one run before Tomas could record an out. An intentional walk loaded the bases, and a hit brought home another baserunner. Then, Prizina doubled home two more to run the inning total up to four.

Junior Mason Sharp came in to relieve Tomas after he got one more out. However, the afternoon wasn’t nice to Sharp either as he allowed the next three runners to score due to a wild pitch, a single and another double.

The Argonauts tacked on another two in the bottom of the sixth inning for good measure as Salvador Ferro pitched a complete game shutout, conceding five hits and four walks with eight strikeouts.

All five of those hits were singles as the Blazers didn’t get a runner to third after the first inning. Junior shortstop, Ryan Romano, and senior right fielder, Luke Ard, each collected two hits while the rest of the line-up went 1-20 on the day.

In a beautiful get-right game on the heels of the setback VSU suffered earlier in the day, it was the Blazers who did the beating down in the final game of the series.

A six-run third inning blew the game open early, and a masterful start from junior Brandon Raiden made a comeback nothing but a distant dream.

In his sixth win of the season, Raiden pitched his own complete game shutout, one that was even more impressive than Ferro’s in the early game. Raiden only surrendered three baserunners on two hits and one walk, coupling that with seven strikeouts in a pithing masterclass.

The Argonauts only got one runner to second base the whole game, and he was promptly erased by an inning-ending strikeout.

Senior left fielder, Jisjar Clotida, joined the grand slam club in the third inning as he blasted one after Doskow was intentionally walked to load the bases for him. That dinger chased starter Chase Wilkerson from the game.

That did little to change the Argonauts’ fortunes as the next five Blazers reached base on a collection of walks, hits and fielder’s choices. They plated two more runs before the inning ended with VSU up 7-0.

Despite Raiden needing only one run of support, the Blazers tacked on an extra four in the sixth inning. Sophomore catcher, Jacob Harper, and freshman second baseman, Ryan Villaman, both had two RBI singles in the inning, as the Blazers continued to pour it on.

The Blazers improved to 28-12 on the season and 17-9 in conference play, while the Argonauts dropped to 21-19 overall and 15-10 in the conference. Both squads have clinched postseason berths which are slated to start May 6th.

The Blazers sit as the No. 2 seed right now, one game ahead of Montevallo while West Florida is a game ahead of Auburn Montgomery for the No. 4 seed.

Before the playoffs, however, the Blazers have one more regular season game to play: a home matchup against Flagler on April 27 at 6 p.m.

Previous ‘Heartstopper’ Review: a must add to your watch list
Next VSU Displays Diversity with Parade of Flags