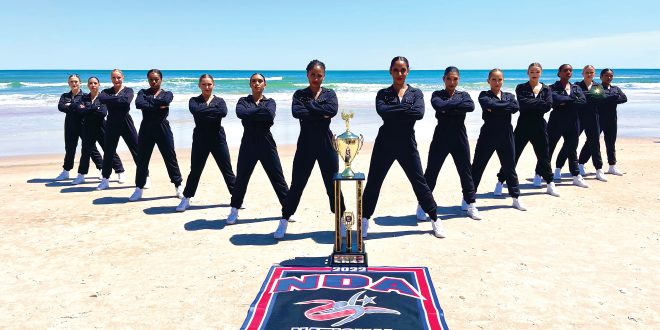 Every year, starting with football season and continuing through basketball season, VSU’s Red Hots celebrate and support the teams while entertaining the droves of students and local supporters.

All the while, all 19 members of VSU’s renowned dance team are working hard behind the scenes, practicing and lifting multiple days a week for hours to perfect their craft. All for a single competition, and it’s for all the marbles.

“They don’t have any kind of inter-conference competition,” Kelli Fields, the Red Hots head coach, said.  “The varsity brand and National Dance Alliance is the only competition route that we have and they only offer that one competition. So that is why the pressure is so intense on that one opportunity.”

This year they made the most of that opportunity. The Red Hots traveled to Daytona and came back home with the program’s eighth national championship, scoring a blistering 94.8286 points in the hip hop finals.

This year, like each of those years, the Red Hots’ practice routine consisted primarily not of their national’s routine, but game day routines for football and basketball games.

“These last couple of weeks – really once basketball ends – is when we don’t have to work on game day routines any more. Then practices go 100% into nationals,” Fields said. “As much as we enjoy doing our game day, showing off for our Blazer nation, it’s our chance to see how we stack up against other DII schools at a national competition.”

“It’s nice just do it for ourselves, and not have to worry about any other sports, just all about us,” said team captain Carmen Rowser.

So, what made this year so special? Fields says she’s never seen a group stick together like this, even with the new members of the squad.

“There was a level of commitment and dedication from this group that I had yet to ever see,” Fields said. “I knew they were something special, just with their dedication to the program.”

Fields explained how the Red Hots training can be a shock to some young dancers new to the team.

“Red Hots is not for everyone,” she said. “The level of intensity, the time commitment and the demand of what we do is a little different than what most dancers coming from a dance studio or even high school dance teams have experienced. So, a lot of seasons will have girls, they make the team but about halfway through they realize this is just too much. This year we did not have a single team member quit.”

Rowser said she saw that attitude in the youngsters all year long. It wasn’t something that just apparated when it came time to compete on the national stage, it was present in every one of their performances.

“But there’s just so much determination to not even just do well at nationals. But just do well, like translating our national’s energy into game day stuff,” Rowser said.

Never was that energy more essential than on the second day of the competition, where the Red Hots set the tone for the championship victory.

The first day was just the preliminary performances for the jazz division, where the Red Hots notched a score of 89.6. While Fields was proud of the performance, they placed third which Fields was not satisfied with.

“I thought both dances [jazz and hip hop] had a really good shot to compete,” she said. “When we got done with jazz prelims I was disappointed in the score. And not because the team had done anything terrible, I thought the team was great. That’s where I guess my opinion was different than the judges.”

Then, on Friday, they competed in the jazz finals. Their score didn’t improve, and they finished in fifth place, and again, Fields said she was on a different page than the judges.

The most important thing is that her and her team were on the same page because even though the jazz competition was over, their day was far from finished. Later that afternoon, the all-important hip hop preliminaries awaited.

“Even the team was a little disappointed,” Fields said. “But we came together and I said, ‘Ok, you’ve got about five more minutes to be sad about this, and then we are switching into hip hop and you’re going to use this now as motivation.”

“We used that as a time to refocus our minds and regroup,” Rowser said. “Like, ‘Ok, let’s use this as motivation to put everything we can into hip hop and do our best and just kill it.’ So that’s what we did. And I think we all came off the stage even ready to go to practice for the finals, like we’re ready.”

Their score of 91.5 put them in first out of the gate. In fact, it would’ve placed them fourth in the final round.

“They killed hip hop prelims,” Fields said. “I had never seen them dance better. They literally shut it down, and when they came out of prelims and first, they were so excited.”

Fields also explained the importance of doing well in the preliminary rounds.

“You kind of set the tone at prelims,” she said. “If you’re in first, and you can do the same thing in finals, you can usually keep it.”

They did keep it, and won the whole shebang. Their score actually jumped up three points in the final round, scoring 94.8286 points in the hip hop finals on Saturday, nearly two whole points more than second place Lindenwood University with 93.0857.

Fields is no stranger to championship level competition, but this squad and their refusal to back down or quit left an indelible mark on her.

“That’s just what this team can do. They can take this disappointment. Let it go. And turn it around and still push and bite.”