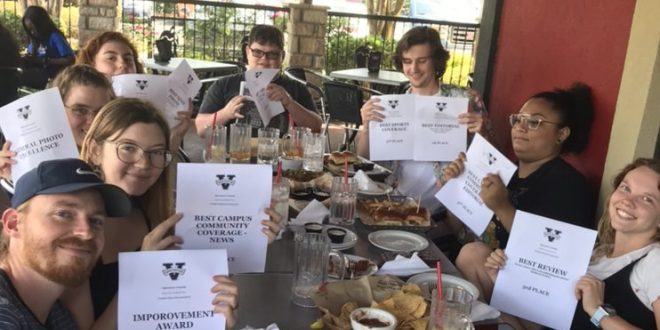 The Spectator staff holds printed copies of their awards

The Spectator competes against 19 other Georgia colleges in the contest, including UGA, Georgia State, Emory and SCAD. This year, the Spectator brought home awards from 10 of the 24 categories.

“I am so proud of the Spectator staff for the hard work, dedication and talent they have put into getting our content out this year,” Editor-in-Chief TJ Weaver said. “We have all worked tirelessly to get the job done, and all of that work has paid off in the end.”

“I’m truly proud,” Jonnie Brewer, managing editor, said. “Journalism is too often looked over. People don’t realize that journalists are the reason we know what is going on in the world. As citizens of the world, we seek news organizations to simplify complicated things for us. A lot goes into that.”

“When I submitted my feature for the contest, I knew I had a shot of winning an award,” he said. “Coming in second for best feature is something that really boosted my confidence as a writer.

“I 100% did not expect this,” she said. “The photo editor put it in without me knowing about it, and I got second place, beating the Red and Black [UGA’s student-led newspaper]. It may be second place, but I still placed and that’s something to be proud of.”

“This is my first time competing in the GCPA competition and I feel like my stories were judged fairly,” she said. “I can’t wait to compete again next year and bring home more awards for the Spectator.”

Staff members believe the awards represent the dedication they have working for the Spectator.

“It makes me feel proud of our staff because it is clear we make an impact from what we do,” Newsletter editor Isabella Schneider said. “All of us must work together to produce quality content for our readers.”

“I think it not only shows off the dedication at the Spectator, but it shows that we care about the things that should be cared about,” Brewer said. “Journalism is crucial to our democracy, and it’s promising to witness and be a part of a student-led organization that recognizes and practices our first amendment right.”

GCPA usually holds a banquet and ceremony in Athens, Georgia to deliver the awards; however, this year, the ceremony was canceled due to low registration.

In response to this, the Spectator held their own awards ceremony with lunch at Chili’s on April 29. Awards were presented by Spectator adviser Ted Geltner.

“I’m extremely proud of the Spectator staff,” he said. “They’re devoted to providing the VSU community with accurate and thorough news coverage. To earn this many statewide honors while competing with much larger universities is a testament to their skill and determination.”

Previous Photos: Class of 2022 departs from VSU
Next Tunes to kick off your summer break