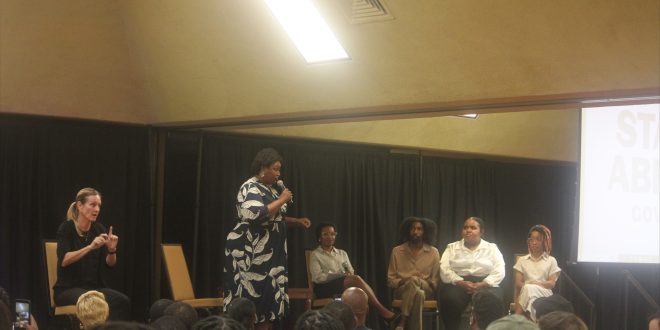 Stacey Abrams made a splash at VSU Tuesday afternoon when she came to campus for her OneGeorgia rally, part of a swing through Valdosta during her campaign for governor.

Abrams, who is the Democratic candidate running for governor against current office holder Brian Kemp, came to VSU to promote her campaign and appeal to the student voters and faculty of VSU.

The rally, held in the Magnolia Room of the University Center, was filled with over 100 people present to listen, ask questions and give support to her cause.

The rally was hosted by VSU’s Young Democrats, an organization dedicated to support of the Democratic party and its leaders.

Abrams discussed topics such as financial aid, teacher salaries, and government spending and others. Questions were provided by a panel made up of members of the Young Democrats, as well as audience members.

Teachers’ salaries were a hot topic among the crowd.

“Over the last four years, it took the current governor four years to come up with $5,000,” Abrams said. “That does not cover the cost of inflation because for most Georgia teachers, in real dollars, they’re making less now than they were making in 1999.”

She also discussed her plans, were she to be elected, for teachers’ salaries.

“I… want to raise the salary for every educator by $11,000 over four years, real increases that have meaningful effects,” she said.

The challenges teachers face is a crucial part of the message of her campaign.

“How are you focusing on the work you need to do when you’ve got two jobs?” she asked.

Merchandise including bumper stickers, yard signs, fans and t-shirts were available at the event.

After the event, Abrams sat for a number of interviews with local and national media outlets.

She now is making her way across the state to other cities to appeal to voters.

Previous Editorial: There is more to life than what’s on Earth
Next Blazers take on Virginia Union on Family Weekend