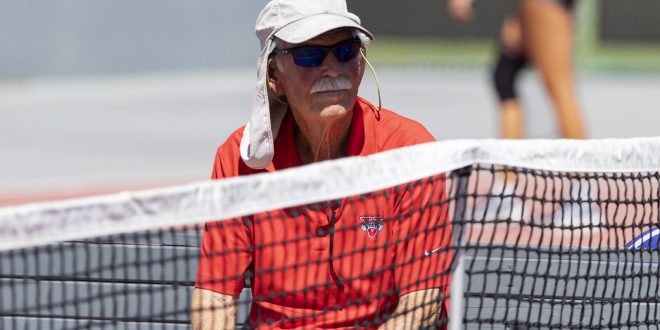 VSU has strengthened their line-up for the upcoming season with two-time National Junior College Athletic Association champion Olivia Pezo. The Swedish native has joined the women’s tennis team as a junior this fall.

Pezo, 21, is a NJCAA 2021 singles and 2022 doubles national champion who transferred from Hillsborough Community College to VSU to continue her studies in international business while playing tennis for VSU. She chose VSU because the men’s and women’s tennis teams are known for playing tough and strong schedules and being some of the top-level teams in Division II.

The Swedish native is also eager to work with head coach John Hansen and graduate assistant coach Nick Rosatti. Hansen said that the feeling is mutual and is happy with Pezo’s game style.

What stood out especially to Hansen was her “good” aggression towards the ball in both single and doubles and with the serve, which is a key component in the game of tennis.

Rosatti agreed that this was indeed one of the components that drew their attention towards Olivia. Another key component for Rosatti was Olivia’s experience and mentality on the court.

“College tennis is different from any tennis that you’ll ever see, there is a lot of yelling and it’s very aggressive mentally,” Hansen said.

Rosatti explains that with Pezo having made multiple deep runs into nationals with her team and individually, she has the experience on how to deal with being heckled and can be an asset to help the team grow in this mental aspect.

“Whenever I get on the court, I refuse to lose,” Pezo said. “I always do anything to change my game to try and get the win.”

Hansen and Rosatti are expecting Olivia to be a helpful leader to the team as her former coaches also praised her on taking part in this role. Pezo will most likely be taking a slot anywhere in the line-up in single as well as in doubles.

Olivia likes to take this strong mentality with here wherever she goes in life. When transferring schools there is always an adjustment period; however, for Pezo this period did not last long.

“I already knew some people here before I came here, so that helped me early on,” Pezo said. “I also love meeting new people, and together with that, I have someone here on the team that speaks the same language as I do as well. So, I did not need a lot of time to adapt to the new environment.”

Olivia and the women’s tennis team will play their first invitational Sept. 16-18 in Thomasville, Georgia, and will then travel to Montgomery to take on the ITA Regional Championships at Auburn University at Montgomery from Sept. 23-26.

Previous VSU kicks of National Hispanic Heritage Month
Next People Poll: How do students feel about losing the game during family weekend?