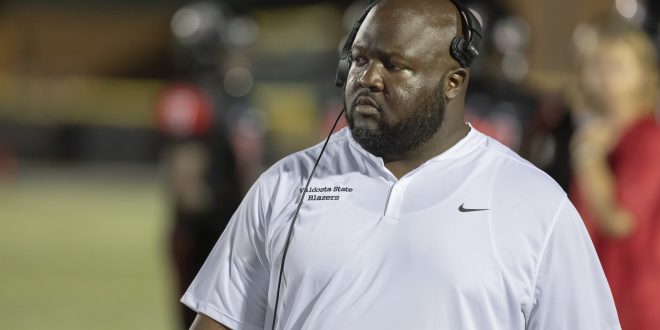 Opinion: Keep the faith in Jackson

The VSU football team’s latest performance, a 70-31 defeat at the hands of No. 25 Delta State, has fans clamoring for first-year head coach Tremaine Jackson to be fired.

Blazer fans have expressed their disappointment in the Blazers’ 3-2 start to the season via social media. Some have even gone as far as playing the “woke” card, referring to Jackson being the first-ever African American football head coach in Blazer history.

Still, some fans have faith that Jackson and the Blazers will turn things around. However, there has been a growing number of fans who want Jackson ousted, even though athletic director Herb Reinhard rarely fires coaches in any sport.

While I sympathize with Blazer fans who are unhappy with how the season has gone to this point, calling for Jackson’s head five games into his tenure is undeserved.

It’s no secret that VSU is one of the most successful Division II football programs in the country. Since VSU began sponsoring football in 1982, the Blazers have gone 319-131-4, making the postseason 18 times and winning four national championships.

It’s also no secret that the Blazers have had a host of elite coaches at VSU. Whether it’s been air raid founder Hal Mumme, David Dean (aka the Dean Machine) or even former assistants such as Kirby Smart and Will Muschamp, the Blazers have been a cornerstone in modern college football.

However, while the Blazers have had plenty of success on the field, that also means that VSU is regularly on the job market for a new head coach.

People seem to forget that Jackson is the third head coach hired in the past seven years, as both Kerwin Bell and Gary Goff left for better jobs after just three years. With all the staff turnover, there’s bound to be growing pains.

That’s held especially true for the defense. Jackson stated before the season opener against Keiser that he was starting 10 players who did not start in the opener in 2021.

It’s also not like the defense was in great shape before Jackson arrived. The Blazers’ run defense got exposed late last year, surrendering 347 rushing yards in a 61-42 loss to West Florida before giving up 459 rushing yards to Ferris State in a lopsided 58-17 loss in the national championship.

The late-season defensive woes were the driving force behind why Jackson was brought in.

Prior to being named the head coach of the Blazers, Jackson was the head coach of Colorado Mesa, where he went 10-3 in two seasons. In 2021, the Mavericks had the 13th ranked scoring defense, giving up just 15.6 points per game.

Even though the defense was hardly horrible for most of 2021, it was evident that changes needed to be made defensively for the Blazers.

Additionally, there was no question that the defense would have its work cut out for it. As bad as it’s been to this point, an overhaul on defense isn’t something that happens overnight.

All of these things have accumulated into what’s been on display so far in 2022: a defense that has struggled for the most part and an offense that has had all the pressure put onto them to perform well.

Those struggles all came to a head against Delta State, who was coming in as one of the hottest teams in all of Division II. The Blazers quickly found themselves behind as a powerful Delta State offense rolled out to a 42-10 lead before hanging 70 on the Blazers.

Even with the lopsided result, however, the Blazers still have six more games to play, including four home games. To say that Jackson should be fired after two losses is outrageous.

After all, before Bell delivered the Blazers their most recent national championship with a perfect 14-0 season in 2018, the Blazers were just 13-7 under Bell, missing the playoffs entirely in 2017.

I think that Blazer fans have become accustomed to everything going well, which certainly isn’t bad. After all, the Blazers had gone 36-3 in the previous three seasons.

However, it wasn’t that long ago that the Blazers weren’t even the best team in the Gulf South Conference, let alone the best in Division II.

Though things look bleak right now, there’s still another half of the season to play. There’s no telling how the season will pan out.

I, for one, will be “keeping the faith” in Jackson.