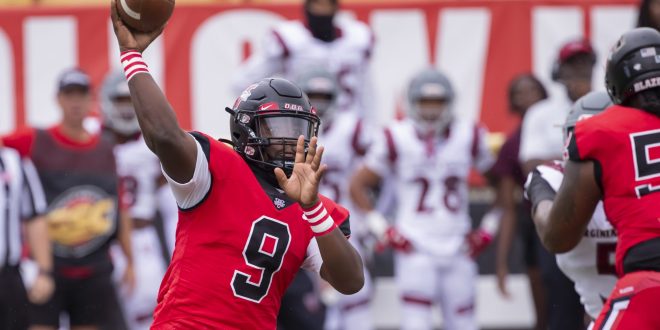 The Blazers are coming into the game on a bitter note after getting routed by No. 13 Delta State 70-31. The loss knocked VSU out of the national rankings, marking the first time in over four years the Blazers have been unranked.

It’s a true taste of irony for VSU, who entered the rankings in 2018 following a 58-24 over then No. 8 West Alabama. Four years on, this game against the Tigers could determine whether the Blazers can still make a postseason run.

Despite that, head coach Tremaine Jackson says his team is all too familiar with being in this position.

“If you look at the history of our program, we’ve been here before,” Jackson said. “We lost by 39 points. We’ve done that before, and so those guys have been a part of that, too. They know what it feels like. They know how they bounce back from it and how they recover from it.”

Additionally, Jackson alluded to how previous teams have made a run after starting off slow.

West Alabama enters Saturday’s matchup coming off a 37-14 win over Shorter. The Tigers racked up over 300 yards on the ground, as well as four touchdowns.

Leading the way for the Tigers was junior running back Bry Webb. Webb racked up 164 yards and had two rushing touchdowns.

VSU’s run defense will once again be heavily tested. On the year, the Blazers are ranked a ghastly 147th in the nation in rush defense, giving up 223 yards per game.

While Webb was the top back last week, Jackson is also having to prepare his team for running backs Antonio Brown and Demetrius Battle.

“They’re really good at tailback,” Jackson said. “They’ve had some struggles in the passing game, but they haven’t needed to pass the ball very much. … Anytime you rush the ball for 300 plus yards, you’re going to run the ball, and they played really good defense. So, all of them are more scary. You know, we got to have a game plan for all of those guys.”

Despite the lopsided result, the Blazers had some success on offense, racking up over 400 yards of offense. However, it was a slow start that doomed them as Delta State raced out to a 21-3 lead and never looked back.

Slow starts have been a recurring theme for the Blazers this season. While many typically focus on the offensive side of the ball, Jackson emphasized that it is the football team as a whole that has started off slow.

“I think people focus more offensively because they want you to go down and score, but we’ve been getting out to a bad start as a football team,” Jackson said. “We’ve emphasized and emphasized, and we continue to. We’re going to beat it like a dead horse until we get it right. And so hopefully, we do start fast.”

Saturday’s matchup marks the first of two straight home games for the Blazers. Though VSU has been on the road for each of the past three weeks, Jackson believes the road trips strengthened the team as a whole; though, he is also glad to be back home.

“I do believe that three weeks being away from here was really good for us,” Jackson said. “It’s better when you can go to your house after the game. It is better when your family can make it to the game. We’re definitely ready to be back. It’s Pink Out night, and that’s very near and dear to some of our players’ hearts. There’s a lot of people that they know that have survived cancer, a lot of cancer and all forms of cancer, especially breast cancer.”