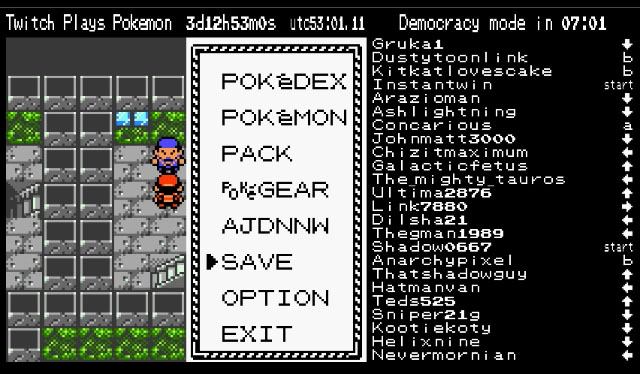 The Infinite Monkey Theorem states, “With one thousand monkeys typing on a typewriter, eventually one will write Shakespeare.”

That deduction was considered when an anonymous programmer decided to create a program that allowed multiple people to play the same game simultaneously.

The social experiment named “Twitch Plays Pokémon” began on Feb. 12 and was hosted by the website Twitch.tv.

The concept was simple: people would type in commands, and the character, named Red, would execute them; eventually, with enough time and effort, the game would be completed.

Once the game started, people immediately began typing commands. The website featured a real-time stream of the game’s screen, a clock to document the amount of time elapsed, and a feed of commands typed in by participating Twitch users.

As the stream became more and more popular, more users joined Twitch to take part in the fun. According to a blog post made by the Twitch website, 1,165,140 users entered commands to help Red finish his Pokémon journey. Over nine million people watched the stream without entering commands.

After a struggle with an in-game puzzle that caused the game to come to a halt, the programmer introduced the “Anarchy and Democracy” system. This meant that while people entered commands, others could vote for anarchy or democracy.

While in anarchy mode, all commands were put into the game, but in democracy mode, people voted on which commands to implement and the character was able to finally overcome the puzzle.

After 16 days, seven hours, 45 minutes and 30 seconds, Red defeated his rival and the game credits began to roll. By the end of the game, the stream had over 36 million views.

While watching the stream, fans began to create their own mythology, religions and political standings within the game. The main belief to come out of the game was centered on the worship of “The Lord of Helix.” March 1, the day the game was completed, has now been declared Helix Day (there is a real petition to have this recognized as a legitimate holiday).

Once the first game ended, a countdown began. When the time ran out, Pokémon Crystal, a second-generation Pokémon game, began and the system started all over again.

“For as long as there’s still interest, I’ll continue to run the stream,” the programmer said.

Previous Letter to the Editor
Next Mr. Adgie Goes to Washington: Facing the fear of flight