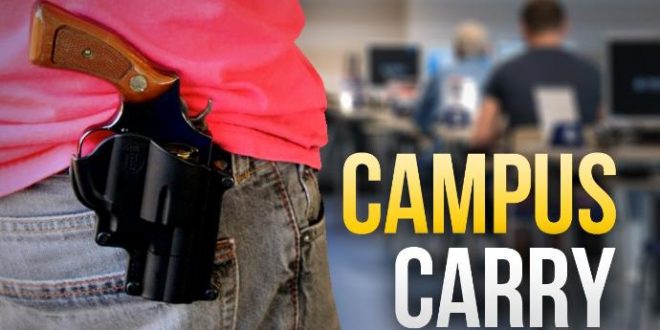 Campus Carry is Now in Effect

This month started off with a bang when the new Georgia House Bill 280, also known as “Campus Carry”, was taken into effect on July 1. The bill was proposed earlier this year to frequent and controversial debate.

The campus carry legislation is meant to affect the University System of Georgia by allowing licensed gun holders to carry a concealed weapon on campus. The full report of the bill is stated by the Georgia National Assembly.

Many voice the concern that campuses will become unsafe when people other than law enforcement can carry a concealed weapon. Others believe that responsible carriers who already have a permit should have the right to carry and conceal.

Mark Whatley, VSU professor of psychology, conducted a survey in one of his classes called “Attitudes toward Campus Carry.” He conducted a survey with 99 VSU students on their attitude toward the new law with encouraging results.

Despite this survey’s conclusion, Tom Hochschild, VSU professor of the department of sociology, anthropology and criminal justice, thinks that this new law is a recipe for disaster and that students will feel reluctant to come to classes and discuss sensitive topics.

“Guns in the classroom makes students nervous about discussing controversial issues, and stifles free thought and intellectual discussion,” Hochschild said. “Some students just won’t show up for certain classes out of fear for their personal safety. Many professors may not broach certain topics for fear of everyone’s safety. Colleges are supposed to be places where free thinking, contrary opinions, and debate take place in a safe atmosphere. Promoting guns in the classroom is contrary to the mission of higher education.”

Regardless of the debates and protest from concerned citizens, the bill has passed, and VSU’s president, Dr. Richard Carvajal, urges students and faculty to come together and accept the newly appointed law.

“I understand that many of you have strong feelings about this bill,” said President Carvajal. “Yet, whether you opposed or supported the legislation, it will soon be state law, and I respectfully ask everyone to exercise patience, understanding, and respect as we implement it along with every other institution of higher education in the University System of Georgia.”

Although the law states that a person can legally bring a concealed weapon onto campus, there are very strict limitations that ensure safety but still uphold the right to bear arms. If any person wishes to carry a concealed weapon on their persons, regardless if on college campuses or on a public sidewalk, they must have a valid Georgia Weapons Carry License.

They also need to obey the law and keep the weapon concealed, which requires that it is “carried in such a fashion that does not actively solicit the attention of others and is not prominently, openly, and intentionally displayed except for purposes of defense of self or others.”

These weapons are also restricted to certain buildings and locations on campus. A person is not allowed to carry a weapon into any athletic faculties, residential halls or facilities used for teaching on campus.

Knowing they are unable to bring a weapon into an educational building, a student going to class with a valid carry license might find it counterproductive to carry a concealed weapon onto campus.