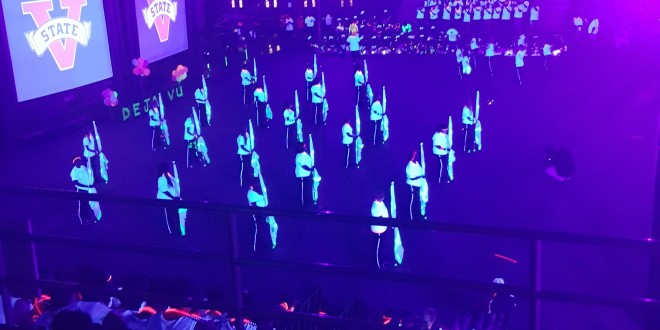 On Nov. 2, VSU celebrated homecoming week with the annual Glow-in-the-Dark Pep Rally in the P.E. Complex at 7 p.m.

Before entering the gym where the event was held, student volunteers handed out glow in the dark paraphernalia to go along with the theme of the event.

The gym was dimly lit and packed with students sporting VSU t-shirts and other merchandise to show their support for homecoming and VSU athletics.

The Blazin’ Brigade band opened up the rally with a performance of the traditional ‘Go Blazers Go’ theme to get students excited about the homecoming football game against West Alabama State University on Nov. 4. The Blazin’ Brigade was also joined by the Blazettes and the flag line.

After the presentation, Dr. Richard Carvajal, gave a short spirit speech about other homecoming events such as the tailgate and the football game.

The VSU cheer squad was the next to take the floor. They entertained the crowd with a cheer that got students out their seats.

VSU premiered the 2017 Homecoming video at the pep rally titled ‘It’s You: Hype Video’. The video showcased the Red Hots, football team and the cheer squad all dressed in black and dancing and cheering near a bonfire.

The winners for the sheet sign competition and side walk chalk competition were all announced at the event and the homecoming court was recognized before the lip sync competition began.

Though some students enjoyed the theme, others began to get bored.

“It (the pep rally) was pretty cool,” Daniel Alford, a sophomore engineering major, said. “I liked the glow theme.”

“Last year’s rally was better,” Bolanle Dahunsi, a sophomore English major, said. “I feel like it could have been better if there was more student interaction so we wouldn’t just be sitting there the whole time.”

Many clubs were involved in the lip sync competition from sororities and fraternities to other organizations such as the Black Student League.

Students had mixed feelings about the lip sync competition and how it was presented.

“There was a lack of diversity. There were significantly more white groups participating than black,” said Rakell Peters, a junior organizational leadership major, said.

“All the lip sync battles were unoriginal and got boring,” Nathan Pettway, a sophomore philosophy major, said.

“I liked the lip sync battles, Taahira Samules, a sophomore marketing major said. “They were hilarious.”

Still, students agreed that it served to boost their school spirit.

“I thought it was still fun,” said Dahunsi. “It kind of made me want to go to the football game.”

“The pepe rally really increased my school spirit for the game,” Samuels said.