Home / News / Helium balloons may be grounded by Faculty Senate 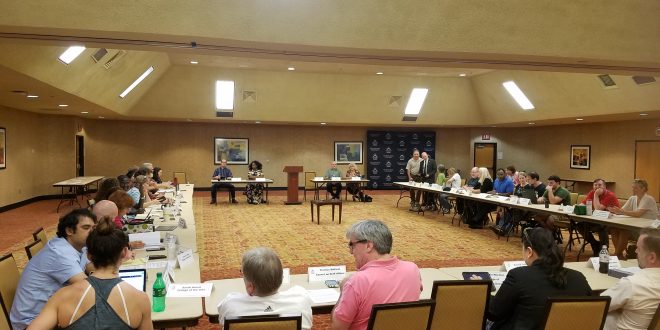 Helium balloons may be grounded by Faculty Senate

The Faculty Senate will consider outlawing the release of helium-filled balloons by students at organization events on Thursday at the its monthly meeting.

The senate will discuss this and other issues on Thursday, Jan. 25 at 3:30 p.m. in the University Center Magnolia Room.

The helium-balloon policy was submitted by the Environmental Issues Committee at the senate’s November meeting.

Discussion over this matter began at the Oct. 13 meeting, where the senate debated “about how to prohibit well-meaning student organizations from releasing balloons into the atmosphere where they cause environmental damage to water, land and animals.”

Vice President of Student Affairs Vince Miller was asked by the chair of the EIC, Dr. Deborah Hall, to support this policy. He discussed it with several student organizations, where “it became clear that without a university policy, that students would probably not police themselves on this issue nor would they understand the environmental damage that such releases would cause.”

The policy was further discussed and voted to be referred to the Faculty Senate at the meeting on Nov. 3. The proposed policy will be reviewed and possibly voted on by the entire Faculty Senate on Thursday.

The policy under consideration states that the release of balloons into the atmosphere “poses a danger and nuisance to the environment when balloons become entangled in trees and power lines or land on the ground or in waters, often far away.”

The result of fallout after release causes litter and may be a violation of private property rights and is “particularly injurious to wildlife.”  Therefore, VSU “prohibits balloon releases A) on any and all university property as well as B) by any student, staff, faculty member or organization who is representing VSU.”

The policy proposed on the Faculty Senate meeting agenda does not list punishments that would result in violation of the new regulation.

In addition to the balloon issue, the Faculty Senate will discuss a number of other issues: