Home / News / A mapped out life: Maya Mapp looks to a bright future 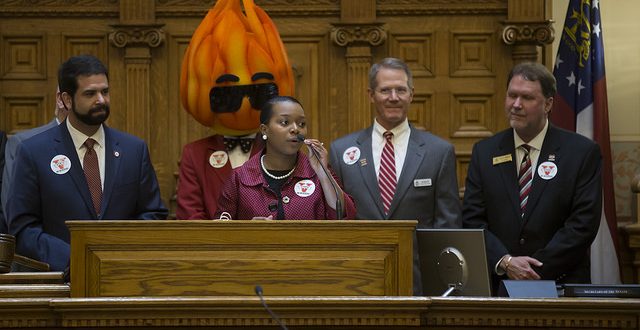 Maya Mapp has been the president of SGA for the past two years. This year is her final year as she graduates on May 5, 2018.

A mapped out life: Maya Mapp looks to a bright future

Maya Mapp took her place as SGA president over two years ago. Since then she has shown a fiery passion for helping the student body and her surrounding peers, but before all of this, Mapp’s life never went according to plan.

Mapp hails from Milledgeville, Georgia or “Millie Vegas” as she calls it. Here, she lived in a two-parent household with her mother, father and younger sister. Mapp’s life was one you could say was problem free at least until eighth grade.

“I was very, very blessed and fortunate when it comes to finances, but going into my eighth grade or freshman year of high school, my dad lost his job,” Mapp said.

Mapp said her father’s job loss humbled her family and made her value hard work. It also forced Mapp to mature when she found herself looking for jobs at 14.

“I got my first job when I was 14 and a half,” Mapp said. “They let me start working at a skating rink, and I’ve been working every day since.”

In addition to funding her desires, Mapp would use her paycheck to help pay for the private school she and her sister went to, Georgia Military College Preparatory School.

It was an understatement to say that after gaining that job, life became a bit overwhelming. Mapp was already in 4-H club, cheerleading, soccer and was a straight-A student. Besides it being stressful, Mapp lost sight of her reasons for joining 4-H club and wanted to quit. There was one issue with that, though. Her family always said to never quit anything.

Regardless, Mapp was adamant on leaving 4-H club. When Mapp finally told her mother about her desire, she responded with a few conditions.

“My mom said, ‘Okay, this is the deal. If you quit 4-H, then you’re quitting everything else, and I’m taking the (bedroom) door off the hinges. There’s also no TV,’” Mapp said.

At first, Mapp thought her mother was the meanest woman in the world, but in the end, she thanked her mother and continued participating in 4-H club. Staying in the club is what molded Mapp into the SGA president she is today. It allowed her to meet the governor, improve her public speaking and gain experiences that shaped her future desire to be in public administration.

Everyone knows Mapp’s passion for VSU, but her heart hasn’t always been here. When Mapp first came to VSU, she had a plan. After sophomore year she was going to transfer to the University of Georgia.

As a freshman, she would use her weekends to either travel to Athens to cheer on the Bulldogs, or she’d travel to Jacksonville for some beach-filled fun. If she wasn’t doing that, she’d scour the campus for every organization she could possibly join. Mapp’s spirit was rowdy, but it was within SGA that gave her a newfound love for VSU.

“VSU kind of snagged me,” Mapp said. “I got so involved with SGA and so involved on campus, and my grades were doing well.”

Though SGA changed her, it was Interim President Dr. Kelli Brown that inspired her to become SGA’s president.

“To see a woman as an interim president, I was just like ‘You know what? I can do this,’” Mapp said.

Mapp said that Brown inspired an idea in her. While she has nothing against men, Mapp said that the idea is to empower women not just through her success as SGA president but also through a senatorial position later in life.

SGA Vice President Aisha Johnson is one of Mapp’s mentees and said she felt empowered as a woman by Mapp’s example in SGA.

“Being across from the office, you see how she gets her work done, how she’s at multiple meetings and still focuses for classes,” Johnson said. “Each day is an opportunity for you to succeed in some type of way. That’s how she is represented. She always gets something done.”

Over the course of her two-termed presidency, Mapp saw SGA grow from a treacherous point of inadequacy to its now prosperous form, one that she can leave behind with a worry-free conscience.

“She wants to make sure that this organization is still growing after she leaves, that it’s left in a good place and that it’s still left in good hands,” Sylandi Brown, SGA secretary, said.

Mapp is currently on track to graduate this May with a bachelor’s in philosophy and political science. She will also leave with a minor in African American studies concentrated in public administration. She plans to attend graduate school but was rejected from one of the first schools she applied to, Florida State University.

Mapp knew that she wouldn’t get into every school that she applied to but didn’t know how much rejection could hurt or how it would test her faith.

“Faith is such a big thing, and it’s something you can’t live without,” Mapp said. “There’s obviously going to be a better place for me to fit in.”

Since then she has been accepted into the University of South Carolina and her former love, UGA. While in graduate school, she plans to obtain a graduate assistantship that involves student engagement or student involvement. Mapp wants to mentor other students as a way of giving back for those who mentored her.

“Her investment is invaluable,” Brown said. “Not only as a secretary, but she invests in me as a person to make sure I’m growing spiritually and emotionally.”

When Mapp leaves VSU after graduation, she leaves confidently as she knows that her school and her organization are in a better place than it was when she first began. She also leaves confident in herself, knowing how much she’s grown.

“I am fearfully and wonderfully made, and I’m thankful for all God has given me,” Mapp said.