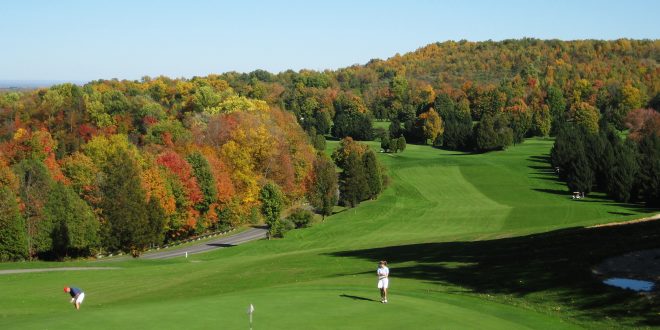 The Country Club of Columbus measures only 6,515 yards long and will play host to VSU Golf this weekend.

The Country Club of Columbus measures only 6,515 yards long, but the course will play more difficult and the stakes will be much bigger as Matt Anderson, Jordan Long and a trio of freshman take on this venue and a quality field Monday to tee off the 2018 season.

Established in 1909, this well-maintained Donald Ross design has stood the test of time with its layout, primarily its small greens, demanding accuracy and precision.

“CCC is an awesome course,” Valdosta State Coach, Jared Purvis, said.  “No tricks, not very long, but the size of the greens can make it difficult at times.  Many players will think it’s easy based on the yardage, but you have to think around the course.”

The set-up allows for different strategies off the tee, some choosing to play aggressively with drivers, while others elect to hit irons.  Regardless of game plan, accuracy and “driving the ball well” are key in terms of having success on this golf course.

The course’s most crucial stretch is undoubtedly the trio of short par 4s that begin the back nine.  Nicknamed “Oh Man Corner,” a play on the famous “Amen Corner,” the picturesque three-hole stretch at Augusta National, they are three holes where a player can come away with three birdies or three big numbers.

“Ten through 12 is probably my favorite stretch of holes we play all year,” Long said.  “You can easily play them all over par, or you can walk out of there playing them three under if you hit solid shots, starting with being in the fairway with just some irons off the tee.”

The country club’s signature hole is the 11th, a 315-yard par four from that stretch that is characteristic of the course as a whole. With a pond in front of the putting surface and out of bounds just a short distance away behind the green, the players never attempt to go for it.  Instead, they will be faced with a daunting approach shot, typically with a wedge in hand, where any ball that is either landed too short or spun too much will roll back into the pond because of the green’s false front.

Legend has it that the bridge over this pond at Columbus served as inspiration for Augusta National’s 12th.  When asked if there is any historical evidence to back it up, however, CCC’s Head Golf Professional Ryan Williams called it a “great story” but also stated that he was unaware of Bobby Jones, designer of Augusta National, ever stepping foot on the grounds.

Jones, golf’s greatest amateur, did however verifiably play a major role in helping his friend Fred Haskins become the club’s first Head Golf Pro, according to Williams.  Haskins went on to serve in that role for 34 years and started the Country Club of Columbus Invitational, since renamed the Southeastern Amateur, a prestigious event that has been held there since 1922.

The Haskins Trophy that bears his name is collegiate golf’s equivalent to football’s Heisman.

Anderson, the lone senior on this Blazers squad, received All-Gulf South Conference honors in each of the last two years.  He earned his place in the lineup based on his past performance and because of his recent victory in the Jack Oliver Invitational, held at Valdosta Country Club.

Long, a junior, has been a presence in this lineup since he was a freshman. He finished third in the Jack Oliver, a result that earned him an automatic spot in the VSU lineup.

Both feel good about their games heading into this season.

Unique to this tournament’s lineup will be a trio of freshman who made their way into the field via their finishes in the team’s qualifying rounds.  That group consists of Gage Smith, Brock Healy and Davis Smith.

Long described the three freshman as being “solid players” and Anderson has been “very impressed” and is “confident in their abilities.”

There will be 16 other teams in the field for this event, eight of them in the August 24 edition of the GCAA Coaches Poll top 25. Lynn, Florida Southern and Florida Tech were ranked No. 2, 4 and 5 respectively.

Host Columbus State is currently the No. 13th ranked team in the country.

“We are all eager to start playing tournament golf,” Anderson said.  “Everyone has been working hard since we have arrived at school, so we are ready to show everyone what we can do.”

Previous Preview: Blazers eyeing fourth straight victory
Next Something wicked comes this way: Check out the ‘Chilling Adventures of Sabrina’

Athletes are confronted with challenges and adversities that make their daily routines difficult for road ...