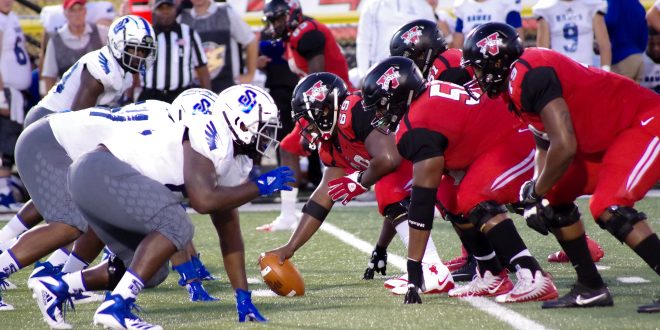 The Blazers line up across from the Shorter Hawks, en route to a convincing 52-0 win last Saturday.

Blazers run away, yet again

1,066 days. That’s how long it has been since the Shorter University Hawks have scored against the Valdosta State Blazers. That opportunity will have to wait, once again.

A season ago, the Blazers traveled to Shorter, dismantling them 52-0. Saturday’s game was like déjà vu. The Blazers ran up the score behind their rushing attack against the Hawks, pitching a 52-0 shutout at Bazemore-Hyder Stadium.

The Blazers could not capitalize in the first half and only posted ten points against the Hawks’ defense.

Quarterback Rogan Wells passed 5 for 20 on 40 yards and a pick in the half. Wells began to gain some traction in the second half, passing 7 for 12 and a touchdown. The biggest contributor was the Blazer’s rushing attack.

The two-headed running back monster Jamar Thompkins and Seth McGill made up for the Blazers’ aerial struggles.

The ‘Thunder and Lightning’ tandem combined for 213 rushing yards and three touchdowns.

Thompkins, who rushed for 115 yards and a touchdown moved himself to the top of the Gulf South Conference rushing leaders. He said the accomplished didn’t mean anything to him at the moment.

“My team and I are still the underdogs and we got something to prove next weekend,” Thompkins said. “We’re going to get back in the lab and show what we got.”

The thunder of the combo, Seth McGill, tore up the Hawks for 98 yards on ten carries, and added two breakaway touchdowns in the third and fourth quarters. “My mindset was to score every time I touched the ball,” McGill said.

McGill is relying on his work ethic to allow him to build off of what was a breakout game for him.

“I’m going to go into this week going hard,” McGill said in his final remarks.

Though the rushing attack clicked tonight, let’s not underappreciate the Blazers’ defense. The D held it down while the offense were trying to find their niche during the first half, outscoring the offense and holding Shorter to 102 total yards

Defensive back Raymond Palmer scored a 75-yard pick six off Shorter quarterback Tyler Pullum in the first quarter of the game.

The Blazers defense has been stifling their competition throughout the first four games of the season, allowing an average of 254 total offensive yards per game.

The Hawks were held to 223 yards by the Blazer defense led by linebacker Jameon Gaskin.

“We just wanted to be physical,” Gaskin said. “We wanted to play tougher than the other team.”

Gaskin, who leads the Blazers’ defense with 14 tackles, explained that his field vision and his coaches led him to play the leading role in anchoring the defense.

“I was just reading my keys and trusting the coaches leading into the game to fit me into the right gaps,” Gaskin said.

Gaskin was elated with the Blazers completing their first shutout of the season and is doing whatever it takes to help the graduating seniors come out on top for their last year of collegiate football.

“It was special, being a freshman and being able to start means a lot to me. I just want to help these guys go out with a bang,” Gaskin said.

Their record now stands at an unblemished 4-0 in the GSC, while the Shorter Hawks extended their putrid losing streak to 32 games, stemming back to their 2015 campaign.

The Blazers are looking ahead next week, as they will be on the road to match up against the Mississippi College Choctaws at 8 p.m.

Previous Something wicked comes this way: Check out the ‘Chilling Adventures of Sabrina’
Next Cross Country improve in Gainesville