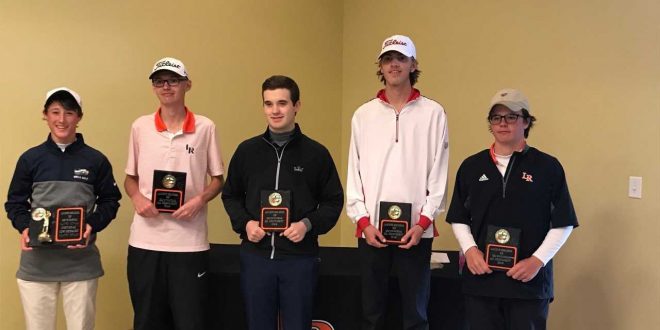 Davis and Gage Smith (pictured the two on the right) are 11 inches apart, but going back to their boyhood days in northern Georgia, they’re as close as anyone in VSU Athletics.

Davis Smith grew up in the northwest Georgia town of Dalton, the Carpet Capital of the World. Located in the Blue Ridge Mountain Valley, the mountains are the only geographic barrier between him and LaFayette, a place closer to Chattanooga than Atlanta, where Gage Smith had lived his entire life.

The 30 minutes that separated the two growing up just wasn’t enough.

D2, as he’s come to be known, made that drive from his home in Dalton to LaFayette on one fateful day.  It was a Georgia State Golf Association event, and there to greet him at the first tee was his future college teammate.

Davis was only nine years old at the time, Gage eight, but the tournament set the tone for what their relationship would become.

It was the first of several times the two would tie in their early years.

Gage got the edge both in that first encounter and on most occasions in those days.

“I think in those years or so that we played those events, I and he might’ve tied five or six at least, and I think I pretty much won all of those in a scorecard playoff,” Gage said.

During their younger years, the two played on two of Northern Georgia’s top middle school teams, competing against each other three times each year, once in LaFayette, once in Dalton, and then another match occurring at “The Farm” in Rocky Face.  As 6th graders, in a memorable match at Dalton, the two battled it out until dark, both having to share the victory with nine-hole rounds of 36.

Despite their closeness in scoring over the years, the two certainly have different ways of getting the ball in the hole.

“Gage will hit fairways and greens and plays, for the most part, boring golf,” D2’s Dalton High School Coach Brad Beck said.  “Davis, on the other hand, can miss a fairway, then miss the green, and chip in for birdie.”

Both their long-standing friendship and their differing styles of play serve as an advantage for them in team matches.

“You can tell they grew up playing together,” Junior Jordan Long said.  “They know each other’s game so well.  We’ve played multiple two on two matches with them being on the same team, and they are tough to beat.”

“They are always on the same wavelength,” fellow Freshman Brock Healy said.

They don’t look much alike, even if they’re only about five pounds apart.

“We’re probably the least, if you’re just looking at us, about the two least likely people to be hanging out together if you take a picture of the golf team,” Gage said.

“Davis is gonna be the tallest, and I’m gonna be the shortest.  I’ve got brown hair, Davis is blondish, and you probably wouldn’t think that we were as close as we were just by looking at us.”

D2 (not as a reference to Division II but to the All-Conference Davis Roche who came before him) stands at six foot five, a tall drink of water who has never weighed above 141 on the scale.

Vibrant, energetic, he’s the type of player you want on your team.

“Davis Smith has the perfect personality for golf,” Beck said.  “He never gets too high or low and is always thinking the next shot is going to be a good one.  It rubs off on his teammates as well.  He is always pumping his guys up or asking them how they are doing and encouraging them if need be.”

He is virtually the same in his everyday life, a jokester with a positive energy who is always good for a quality story both as the subject and as the one telling the tale.

Gage is only about five foot six, barely growing since the time he first met D2 10 years ago at his home course in LaFayette, Georgia.

“My license says 5’4.” I might’ve grown a little bit since then, not much.” Gage said smiling.

Not much has changed about Gage’s personality since their younger years, either.

“He’s still one of the most country people I’ve ever met,” D2 said.

His Blazer teammates call him “Bruther,” and yes, I did spell that correctly, because, according to Davis, “He’s a redneck, and I think he’d agree to it.”

“That’s me,” Bruther said as if to make known how fitting the description was.

On the golf course, Gage is unquestionably competitive, small in stature, but a dog who will fight with anyone.  As a 14 year-old playing in his high school regional tournament, he not only picked up the slack after his team’s No. 1 player withdrew, but won the event over two future All-Americans at Dalton State.

“Our No. 1 had withdrawn from the event, and Gage found out while he was one under on 11 tee,” his LaFayette High School Coach Tom Langford said.  “All he wanted to know was how the guy was playing that had been playing with our No. 1.  I gave him the info he needed, and he played the last eight holes in two under to shoot 69 and win region.”

As a sophomore, Gage found himself in the premier group in the Georgia State Tournament with the state’s top player, future Georgia Bulldog Will Chandler.  The current VSU Blazer didn’t win, but his three birdies on the last three holes demonstrated the 135 pounder from LaFayette’s refusal to quit, despite the circumstances.

It could be said that the environment at LaFayette Golf Course helped mold Bruther into the type of man he is today.  A municipal layout located near an airport, it’s the type of small town atmosphere where everybody knows who wins and who loses, and no secret can escape anyone.

“You’re gonna fight until you get beat, you know, because until you play with that guy again, you’re gonna hear about it.”

The same could be said about the grudge matches that take place between he and D2 on a daily basis.

“It’s cool having somebody like that to push you…If you play badly or you get beat, you’re gonna have to hear about it, so it makes you want to play your best every single day,” Gage said.

For Davis, Dalton Country Club served as a “second home,” a place with high quality facilities, where he could practice or play from sun up to sun down and fellow members treated him well.

“There is a lot of members who are nice to me and have taken care of me and helped get me to where I am today,” Davis said.  “They have taken me under their wing.  The country club has a lot of older members as well, and they have always been very nice to me.”

Roommates in Georgia Hall, the two freshmen don’t have any classes together, but make it a routine to meet up with each other for lunch at Palms Dining Hall and then one of them will drive the other to Kinderlou or wherever they happen to be practicing that day.

Then it’s usually a trip to the Student Union for a Chick-Fil-A meal exchange and some sports viewing followed by homework or a ping pong match that replicates the nature of their meetings on the golf course.

Much like their daily grudge matches at Kinderlou Forest, neither will settle for an unsatisfactory result, and the two compete until the final point.

That match point, however, is never enough for them to stop playing.

“Best of three” becomes “Best of five” and can go on for hours in a particular session.

One could argue that it is this common attribute that creates this inseparable bond between these two, an endless desire against losing and the willingness to never surrender from a potential challenge.

In a high school tournament between Dalton and LaFayette High Schools, Davis made a special request to his coach to be paired with Gage so that they could go head-to-head with one another.

Gage gave Beck a reminder to ensure he would make it happen.

“That’s what I love about both of them,” Beck said.  “They back down from no one.  Both will take on anyone anywhere at any time.”

Not only did D2 welcome the opportunity to play against Gage, but it was also him that pushed the country boy from LaFayette into playing with him at VSU.

The allure of Titletown got Gage intrigued, prompting him to send Coach Jared Purvis an email of interest.  From there, Purvis saw Gage play in the Georgia State Tournament at the Country Club at Columbus, where he would make his collegiate debut in September.  At the prestigious Future Masters in Dothan, Alabama last June, he posted rounds of 73, 73, and a bogey-free 66.

“I came down the next day, that Monday, on a visit, and me and my dad, we toured the school and everything, went out to Kinderlou, and it was just hard to beat,” Gage said.

Purvis gave him an offer on the spot.

Meanwhile, without Bruther knowing, D2 had already made his commitment to the Blazers after receiving an offer of his own.

The two friends decided to become roommates and to quote Gage, “The rest is history from there.”

“Oh, it’s great!” Davis said enthusiastically.  “Gage is a lot more neat than I am and clean, so I’ll find him sometimes cleaning up some messes I’ve played a big part in, but yeah, it’s awesome living with him.  He’s a great roommate.”

“We fight like brothers, and you would think we were brothers if you walked in our room about eight o’clock in the evenings,” Gage said.  “We do everything pretty much.  We ride together, eat together, whatever you know?  So it’s a pretty cool experience knowing somebody, going to college with somebody you’ve grown up with.”

Previous Blazers look to down Bears in quarterfinals
Next Lady Blazers drop out of top 25, lose to Union