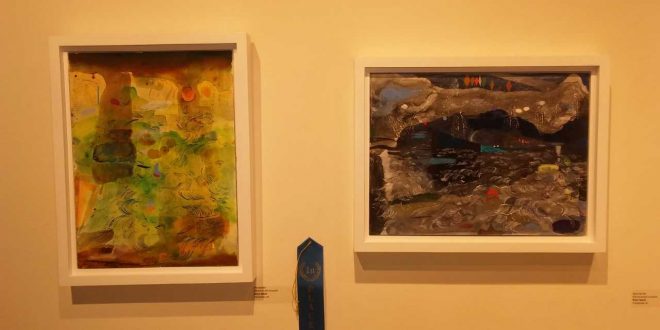 First prize winners "The Garden" and "Stars Fell On" both by Bryce Speed in the Valdosta National 2019 Exhibition Jan. 22, 2019.

The Valdosta National competition returns to VSU for its 31st year with an eclectic selection of showcased art.

The competition is one of eight annual exhibitions presented at the Dedo Maranville Fine Arts Gallery and is organized by Gallery Director Julie Bowland.

It invites artists across the nation to submit artwork of different styles and media, ranging from classic, practical oil paintings to unconventional three-dimensional abstract pieces. Once selected, submissions enter the competition process with the promise of $1,500 in rewards.

This year, 368 works were submitted from artists across 36 states, but only 45 of which were selected by judge Michael McFadden, Professor of Art at Columbus State University.

“We look for work that will be interesting and educational,” Bowland said. “Artwork that makes students think.”

Bowland hopes that the submissions from the gallery will serve as a teaching tool for students and will educate them on various forms and techniques, as well as broaden the appeal of art to all departments on campus.

“We would like to see more students come to the gallery,” she said. “We want to appeal to students beyond the art program and also the community.”

An opening reception for the gallery took place on Tuesday at 6 p.m., allowing students and members of the community to view the exhibition.

Prizes for first, second, third and fourth place, as well as honorable mentions, were awarded to the respective artists. Bryce Speed of Tuscaloosa, Alabama received the first-place prize with two oil paintings titled Stars Fell On and The Garden.

The selection process was quite rigorous.

“I felt the works that were picked represented the best skills and concepts pertinent in contemporary art today,” McFadden said.

Steven Bradbury, a retired Professor of English from Florida, was the lone contestant present at the opening of the exhibition. Bradbury received an honorable mention for two of his works, Headsprings at Twilight and Ichetucknee Head Springs Twilight #6.

Both of Bradbury’s works are graphite pieces, achieved through No. 2 pencils, graphite sticks, putty and erasers. Stone and metal help provide texture to his drawings.

According to Bradbury, his artistic process begins at sundown and draws to a close at twilight.

He accredits nature as a strong inspiration for his art and finds joy in drawing outdoors, a method referred to as “Plein Air” art.

Bradbury praised the exhibition for its diversity and cited the sticking piece and fourth-place winner TransAmerica # 3 as his favorite piece of art in the competition.