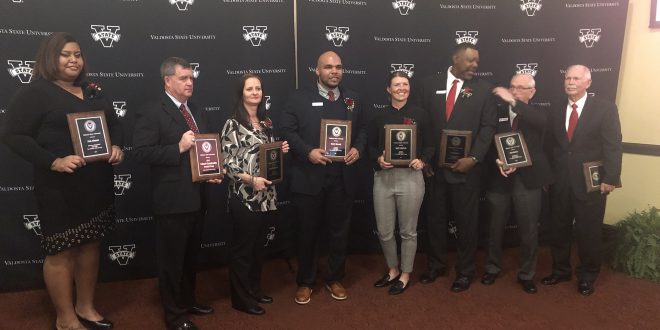 Each inductee was honored by Blazer Athletics. Family and friends were in attendance.

Class of eight enshrined at VSU Hall of Fame

On Feb. 16, six former student-athletes, one longtime contributor to VSU athletics and one national champion football team stood before their peers one last time. This time, it was to give their acceptance into the VSU Hall of Fame.

President Richard Carvajal opened the induction ceremony, setting the record for the main purpose of the event.

“The reason we are all here is to celebrate the great history of Blazer Athletics and this university,” Carvajal said.

Torrey Howard (Football, 2001-2004)
Howard is a three-time All-Gulf South Conference selection for his career at both guard positions.

Anna Einarsdottir McCall (Volleyball, 1998-2001)
McCall, before her collegiate career was over, recorded over 3,000 career assists as a setter, which set a record for VSU at the time.

Pam Johnson (Women’s Basketball, 1981-1984, Posthumously)
Johnson averaged more than 16.5 points per game throughout her four-year career for the Blazers. She is the 13th highest scorer in VSU history, scoring 1,387 points in 82 career games.

Leon Jones (Men’s Basketball, 1983-1987)
Jones averaged 14.6 points per game, as he became the eighth highest scorer in program history and shot 59.7 percent from the field during his four-year career.

Marti Littlefield (Softball, 2009-2012)
Littlefield broke a Gulf South Conference record with 103 RBIs in 2009 and capped off her career with a National Championship in 2012. Also, she racked up three All-American honors.

Dick Rockey (Contributor, 1972-Present)
Rockey is best known for making efforts in updating Blazer baseball scores every three innings to local radio stations. He began a career of broadcasting play-by-play analyses for multiple VSU sports that carried on for more than 30 years.

2012 National Champion Football Team
The Blazers (12-2) were led by a stout defense and an offensive line that protected quarterback Cayden Cochran with their lives. They capped off the season with a 35-7 rout of Winston-Salem State.

Each speech lasted about five minutes, with each inductee giving an insight into their Blazer careers. The crowd was welcomed by Einarsdottir, who walked to the podium nervously.

With her induction, she became the first volleyball player (setter) to be named a member of the VSU Hall of Fame, leaving a loss for words.

“I honestly don’t know how to explain this honor,” Einarsdottir said. “I am just happy to be a part of this.”

She set the tone for the event, and it was matched—or maybe eclipsed—at the end with one man.

David Dean, former head football coach of the 2012 national championship team, walked on stage with a boatload of emotions. About 20 members of the team were in attendance.

Dean began his speech giving stories of all the fun times the team had during its 10-game winning streak. Following the streak, the Blazers were “counted out by everyone,” according to Dean.

“For us to go through all the adversity we went through, we were not supposed to win that championship,” Dean said. “We ended up winning, and that was by the perseverance of this team. This would not be possible without them.”

Cheers ran rampant following all the inductees’ speeches. Athletic director Herb Reinhardt closed the occasion with remarks for the inductees and previous members.

“You all embody what a true Blazer really is,” he said.