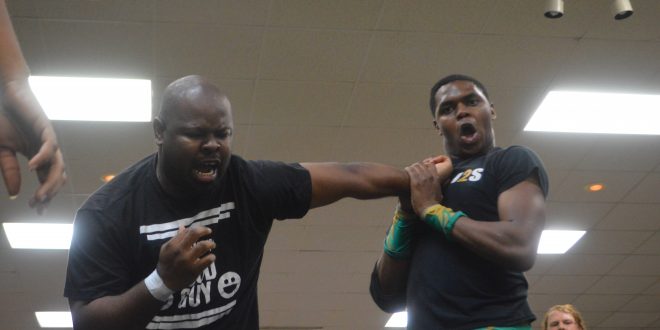 Smith locks 'Good Guy' in an arm hold while Johnston looks on approvingly.

Among the pantheon of American sports, professional wrestling is the estranged sibling. It is nebulous, somewhere between sport and artistic performance.

Its extravagance and exaggerated violence have been ceded to sitcoms and combat sports in terms of cable television, and it would seem the crest of the professional wrestling wave of the ‘80s and ‘90s has all but broken.

It would certainly seem that way, but at Mathis Auditorium in Valdosta, green and pink strobe lights still beat once a month to wrestlers’ walkout songs.

Before attending “Crossroads,” the Feb. 20 Spinebuster Championship Wrestling event in Valdosta, my vision of professional wrestling had been shaped mostly by my father’s secondhand accounts and the occasional World Wrestling Entertainment poster in a friend’s room.

I knew that stars like John Cena and Dwayne “The Rock” Johnson had gotten their starts in the industry, but still, I had never considered it more than men in tights jumping on each other.

I was fully ignorant of the beauty, social power and technical intricacies of this wonderful phenomenon.

But admitting ignorance was the first step. The next one was to learn. As one wrestler told me after his match did not go in his favor,  “Once you stop learning something, in professional wrestling, you become stagnant. You cannot be complacent.”

That wrestler’s name was Proc “The Croc” Johnston, and before I sat with him in the dressing room at Mathis Auditorium, I had sat across from him in the University Center food court, in a chair much too small to contain his frame. He’s an obviously powerful human being, an upperclassman at VSU with a lumberjack body cultivated from a combined football, powerlifting and gator-wrangling career.

He was introduced to the world of professional wrestling after promoter Preston Paradise, whose real name is Richie Wyers, realized that Johnston and his fraternity brother Hunter Mako had potential for excelling in the pro wrestling circuit after they attended a match.

History is rarely made easily. Before they could stand in the bright lights of the ring, they needed to put the hours in at the gym.

“You’ve got to work on your conditioning, your strength, and your cardio,” Johnston said.

A typical match is full of hyper complex moves that, if executed incorrectly, could easily seriously injure your opponent and not in the way you intend. Training and repetition are necessary to avoid injury. Nevertheless, the physical threat remains ever-present.

“Pretty much everything in there hurts,” said Jarius Smith, also known as J2Strong, Johnston’s tag-team partner. “Your body is not used to having another man pick you up and slam you on your back.”

This was evident as the event began. Wrestlers began bleeding, and it became more and more difficult to parse theatrics from reality. Smith would throw a particularly convincing kick, and it would appear to connect, only for the seemingly unaffected target to then slam Smith down on the mat with unrelenting force.

At some point in the melee, a metal beer keg was brought out. It doesn’t matter how much you train, at the end of the day, a keg getting thrown at your head will never feel good.

The ring appears padded, but the padding does little to mitigate the effect of two human bodies slamming into each other. Hayden “Flash’n Cash” Price weighed in on the difficulty of battling Pure Goodness, a 400-plus-pound wrestler.

On top of it all, the audience seemed to thirst for blood, each threat of legitimate injury adding to the fervor of the crowd.

After the dust had settled and the metal chairs, garbage can lids and lightsabers (yes, lightsabers) were stashed away, I sat down in the dressing room in front of an eclectic palette of wrestlers to deconstruct what I had just witnessed.

“A lot of people see this on TV and don’t realize how much it takes,” Smith said. “You’ve got to be crazy to do this.”

It’s not entirely the fault of the viewer to harbor such misconceptions. Until very recently, pro wrestling circuits were very uptight about what goes on behind the scenes, striving to give their viewers a more immersive experience. For the most part, however, the wrestlers opened up about their life in the industry.

What I wanted to know was: “Why does anyone wrestle? What is stopping this activity, with its ever-looming threat of injury, from fading into silent obscurity?”

If it’s one thing, it certainly is not the ease of the job. Smith tells me that eight out of every 10 trainees never return after the first training day, and the night’s events verified the activity’s difficulty.

“I think all of us have that one moment, during a match, when we’re like ‘Why am I doing this?’” Smith said.

But for those who weather the storm, the rewards are immense.

Johnston tells me that, for him, wrestling is more than competition. It is his performing art. Winning and losing matches are secondary to winning the hearts and minds of the crowd.

“It’s my outlet,” Johnston said. “It saved me before, when my parents were going through a divorce. Honestly, I want to be able to give that same feeling back to any kind of kid in the crowd that’s got something going on at school, a parent that might have something going on with a child. If I can make them stop thinking about their problems for 12-20 minutes, then I’ve done my job in my heart. At the end of the day, we got to put on a show, or else we ain’t going to be wrestling in front of [anybody].”

Winning over the crowd isn’t difficult for Johnston and his tag team , Smith—they’re “baby faces,” good guys. They might not always win, but the audience will likely prefer them to the victor.

On the opposite side are “heels,” the antagonists. They will get constantly booed or harassed by the audience for their deceitful behavior, only to throw it back at them twofold.

David “Street Fighter” Ali is a heel and a half, gallivanting around the ring with self-righteous anger while simultaneously engaging in overtly deceitful tactics to gain the victory.

By using these character archetypes, along with many more minor and supporting ones, a wrestling promotion can create what is essentially a never-ending epic, in a uniquely American, comic-book-like fashion. The “good guys” may not always come out on top, but they will be lauded for their virtues, whereas the “bad guys” will be exposed for their vices. It’s a testament to humanity’s hunger for storytelling, in a highly consumable format.

It’s an art as chaotic and extravagant as the nation which popularized it. It’s a place where men, women and children are freely encouraged to shout insults at the performers and extreme violence underlines hilarious entertainment. It’s mixed martial arts with a personality.

That’s exactly what sets professional wrestling apart from other forms of sports entertainment, and what places it more on the track of bizarre performing art: the personality.

When I asked Johnston about how he developed his persona, he seemed confused. I was frequently met with incredulous eyes when I posed the question to other wrestlers.

For a moment, I was scared. What had I done, exactly? Had I broken some unspoken wrestling rule? Had I dug too deep into this esoteric hidden culture? What happens now? Where would they bury my body?

Luckily, the wrestlers were very easygoing. Perhaps because they had just put on a great show, or perhaps because the industry itself requires an impromptu, clever personality. Either way, Johnston silenced the questions bubbling in my head.

“Really, this is me,” Johnston said. “I get out there, I see the crowd, I get amped up, and my personality just goes up to 11. I mean, what you see is what you get. When I’m out there in that ring, that is the exact person you see on the street. It’s not a persona.”

And it was true. They all felt a calling to wrestling, to express themselves in this epic show of personality that is halfway between Kabuki theatre and gladiatorial combat. It isn’t merely a career you have as a backup. For professional wrestlers, it is all or nothing.

Hayden Price has felt the calling in his blood since birth but could never place a finger on its origin. That is until the death of a first cousin he had never met, Conrad Eifram, better known by his ring name “Special Delivery Jones.” Eifram enjoyed a nearly 20-year career with the WWE (at the time, the WWF), until his death from a stroke in 2008.

Price cites his discovery of Eifram as his reason for wrestling and held strong to his dream through adversity.

All these people want to be doctors and firemen and policemen,” Price said. “Half of them don’t even make it there. But I just kept to my word. My parents would tell me ‘You want to be a professional wrestler? You’re just a young kid.’ But I’m 31 years old, and I’m still doing this. I’m doing exactly what I’ve wanted to do my whole entire life.”

For others, like Jarius Smith, the calling came in the form of a childhood promise.

Professional wrestling has become almost synonymous with video games, and the WWE alone has released 70 licensed games to date. As a young boy, Smith would play these games with one of his good friends, David, who got him hooked.

David eventually went off to join the Marines, but they didn’t part ways without a final goodbye.

“We made a promise to each other that one day I’ll be in WWE, go through the United States championship, and he will be at Tribute to the Troops,” Smith said. “I will be having the match; bad guys will be beating me. He will jump into the ring and help me win.”

David was deployed two months ago, and they both supply each other with frequent text updates on the status of their journeys.

Wrestling means something different to everyone involved, but it is undeniably powerful. The looks on their faces proves that. The wrestlers walk around knowing that they are enveloped in a passionate, almost monastic way of life.

“I think the ring is sacred,” Johnston said. “That’s my cathedral.”

Previous Student Government Association: The midterm review
Next ‘We will not be silent’: Theta Zeta sends a message