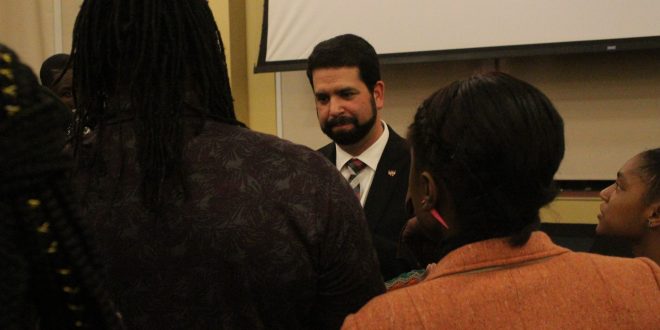 The curious case of VSU and the governor’s office

Everyone talked but who listened.

But who was listening?

On Monday, the office of Diversity and Inclusion and Student Government Association teamed to put together a forum for people to voice their opinions about the undergraduate commencement speaker, Gov. Brian Kemp.

The forum felt more like a firing range at points with speakers releasing passionate and emotional opinions in which they elaborated on why they disagreed with the decision.

Dr. Carvajal responded to most of the speakers before the near two hour event ended for the benefit of time. The president still stayed after the forum officially ended and took on more questions from those who did not get the opportunity to speak.

In the early stages of the event he congratulated speakers for having the courage to share their sentiments in front of their peers.

But who thanked him for having the courage to host the event?

If you attended the event, you may ask what’s there to thank. You likely feel disrespected and possibly even disgusted to call VSU your university of choice.

It may seem like the event was a waste, because Kemp will still be speaking on May 11.

The president has never found himself in this position in his two year tenure. This is the first time that the egg is on his face, and it’s no one’s fault but his own. He made a decision that would’ve been otherwise for the greater good. But because of the controversy that took place during the gubernatorial race, the decision would’ve been frowned upon no matter who won.

There was likely truth to a few of his sentiments. VSU would have sent an invitation to the governor’s office no matter who won the race. That was pre-determined.

The thinking in that is flawed, but I see why it happened. As a university in the University System of Georgia, VSU needs to get in good graces with the governor’s office.

There are several future projects that the administration is planning and they will go a lot smoother with the blessing of the governor.

This infatuation with Brian Kemp only comes to a head at graduation. It started long before that. The new governor made a video for the national champions to play during their championship celebration on Jan. 24.

Feb. 13 was “VSU Day” at the Georgia capitol, in which members of administration, the athletics department and SGA traveled to Atlanta. While there, they posed for pictures with the governor and sat in the house and senate sessions.

I’d assume that somewhere in between then and April 12—the day VSU announced the commencement speaker—Kemp and his team received and accepted the invitation.

So now we are here with a campus full of upset students and an administration that has their hands tied.

As a solution, Dr. Carvajal should go through with forming the advisory committee to assist with selecting commencement speakers. Truly the committee should be expanded to include students in all major decisions that immediately impact currently enrolled students.

And students should flock to be on that committee. Take control of the university that is supposed to be here for you and not the other way around.

As for May 11, Dr. Carvajal will have to live with whatever act, if any, the graduating class chooses. It is their day after all. Whatever fallout that comes from this graduation is sure to change VSU for the future. Hopefully that change can be for the better.