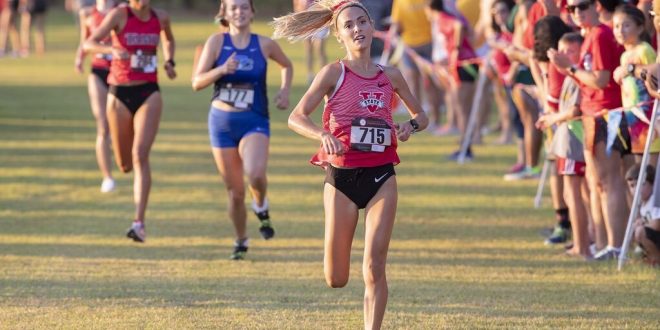 Cipriani finished 36th overall at the Florida State Invitational out of 228 Division I and Division II runners.

Angie Cipriani has her sights set on rewriting the VSU record book.

She credits her prowess to a newfound drive to be the best she can in her sport.

“I started realizing my full potential last year,” Cipriani said. “I wasn’t putting everything in my workouts until then. But I began to put all my effort into the training programs my coach gives me as well as putting all of my effort into practice.”

Cipriani’s evolution as a runner has been sensational. She began running in middle school with her father, and he was impressed with her ability to keep up with him on all of his runs. She’s been near the top ever since.

Smoot saw her talent and desire, and has been able to unlock her full potential.

“She’s bought into the training plan I gave to the team, and has begun to see the results,”  Smoot said. “When I first saw her out of high school, she was running between 21 to 22 minutes. A lot of people can run in that range. Not a lot of runners can run under 19 minutes.”

Cipriani has seen her personal record continue to get better and better. She finished last season with a record time of 20:08, and now she’s seen that improve all the way to the 18:43.

An 85 second improvement typically takes “about three years for most runners,” Smoot said. But Cipriani was able to do it in under a year.

“What was really impressive about her run was the course she did it on. In Charlotte (North Carolina) the week before, she ran an 18:47, and that was on a flat, paved course. Florida State had a grass course with a lot of hills, and she was still able to improve her time.”

At FSU, the Blazers competed against elite Division I runners, and Cipriani’s time was a respectable 36th out of 228 runners. The top time posted at the meet was 17:20.

Cipriani credits her new workout plan starting this summer. The summer before last season, she was nursing back to health from a stress-fracture injury to her foot. She felt her times were slower because she was afraid to push herself as much as she had before. Now, she sees the work paying dividends, and plans to keep improving going forward.

“Coach had set a program to continue to increase my mileage, which has helped me gain a lot more strength,” Cipriani said. “I used to run about 20 miles a week, but now I run over 50 miles a week.”

Speed has been a big part of the new regimen.

“Coach preaches stronger tolerance, and the mileage increase is designed for me to increase my pace,” she said.  “Now I’m running a higher mileage but my pace per mile is higher than I’ve ever run before.”

This is a program Smoot has designed to test the limits of the Blazer runners. The coach mentioned a previous practice where he designed a training regimen meant to take the runners to the point of “near exhaustion.” He wanted to test their limits, and all of the women succeeded. Every runner reached the goal he set forward for them.

“Distance running is meant to be a struggle,” Smoot said. “Endurance-type events are meant for athletes get past the point of discomfort. Many people hit the point of ‘Oh, that hurts a little,’ and stop. Endurance runners who excel are able to just put that back behind their initial thinking and say ‘I can beat this person. I can beat this time.’ Part of that is training, and the other part is desire. Angie without question is learning that she has all of that in her and then some.”

As a student, Cipriani’s goal is to get a Master’s degree at VSU and become a psychiatric nurse practitioner. For now, her and Smoot see the potential for greatness, and as a junior, she still has another year to make an even bigger leap.

The GSC Championship 5K is Oct. 26 at Montevallo, Alabama. It is the final race of the regular season, and Cipriani sees it as an opportunity to make history.

“My goal is to break the school record for the 5K,” Cipriani said. “We have one more run and I have to take 30 seconds off of my time, so I am going to train hard and hopefully write a new record before the end of the season.”

“Her desire is one of the best I’ve seen, but obviously what separates her and other runners at that level is just pure talent,” Smoot said. “Were all biologically different, and her ability made her born to be a runner.”

Whether it’s biology or a strong desire to be the best, Cipriani loves to run, and running comes natural to her.

“The sport has really taught me to push myself and be the absolute best I can be in all areas of life, whether running, school or life in general. It teaches you to keep pushing,” she said. “The struggles now will be worth it in the long run.”