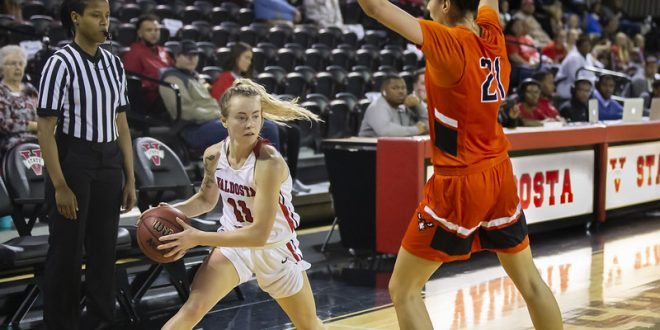 Delaney Bernard has been able to stretch the floor for VSU and has had a major impact on VSU’s offense.

Junior Delaney Bernard is like any other great shooter. She has a great ability of shooting a three-pointer at nearly 40 percentefficiency. Unlike most great shooters who stick to trends and superstition, she’s used her opportunity at VSU to get out of her comfort zone.

Bernard is now putting together her best season to date, her first at VSU after transferring from Saint Leo University. She’s shooting at a 38 percent clip from three-point range, and has been a key cog to the Lady Blazers.

“I used to latch on to a lot of patterns and habits that way,” Bernard said. “But the older I got I realized, that even if I don’t put my shoes on the same exact way, I still have to go out and perform. It’s all about mentality rather than routine to me.”

VSU has scored over six more points per game in the 2019-20year, along with also making nearly as many three-pointers as last season, with eight games remaining in the regular season. First-year head coach Deandra Schirmer stressed scoring and three-point shooting during her recruiting this past off-seasonand Bernard was someone she targeted early.

“VSU was third to last in shooting for the conference last season,” Schirmer said. “So shooting was the number one priority for us in recruiting. I coached against her while I was at Eckerd, and I had seen her scoring over 30 points in a game off of just shooting. So having that connection and seeing her game made it easy for her to be my first recruit.”

That game was last season for Saint Leo University against Trinity College, as she scored 32 points on 10 threes made. It was her best game to date, but she was looking for something new, which brought her to Valdosta.

“I wanted a new challenge and be at a school that is bigger,” Bernard said. “I loved what VSU was all about. I love the school. I love the fans and the pride. And I quickly came to love my teammates and representing this school.”

Her shooting was what stood out, but it was the intangibles that coach Schirmer said made Bernard “one of the best recruiting decisions I’ve ever made.”

“I was very concerned with bringing the right kind of character to Valdosta State,” Schirmer said. “I coached someone who knew her well and got some insight before I recruited her, and she’s close to a 4.0 student, and she brings the right attitude on and off the court. In building a culture at VSU, I knew Delaney was someone I wanted on my team.”

Bernard’s ability to bring out the best in her teammates started at a young age. She began playing basketball when her brother Tyler did and immediately took to the game because of the chance to interact with people socially and experience something new. Once her game began to grow, she developed a jump shot from her AAU coach, and began to get noticed by college teams.

That ability to bond with her teammates extends now at VSU. She connected quickly with her team and bonded with players to build a chemistry rare among so many first-year teammates.

“I’ve helped the team and the team has helped me in a lot of different ways,” Bernard said. “They’ve helped me boost my confidence on the court. My coaches tell me more and more that if I think I’m open to shoot the ball, I probably am more passive than I should be. The team keeps me from getting down.”

“But I’ve been able to be sort of the rock of the team, I’m mostly consistent with my attitude and leadership every day, and that consistency I bring to the court is something that helps keep the team even keeled.”

She works hard to be the best teammate on both ends of the court, and helping out the team however possible.

The last win for the Lady Blazers over rival West Georgia, was the perfect Bernard performance: 18 points, four three-pointers, and also helping out the team with her hustle and ability to work with the team, as she was the leading rebounder with nine for the game.

“I like to contribute to the team however I can, and I think my defense is often overlooked. Jump shooters are generally viewed as lazy on defense, but I work hard and want to do whatever I can to get a win.”

Bernard will continue to help the team win in their next game as they take on Delta State on Saturday.